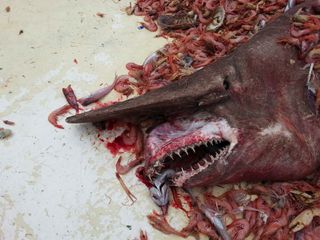 A rare, deep-sea "goblin shark" caught by Florida shrimp fishermen is only the second of these creatures ever seen in the Gulf of Mexico, scientists say.

The prehistoric-looking beast, whose pink color and daggerlike teeth earn the shark its name, is usually seen in deep waters off the coast of Japan.

On April 19, fisherman Carl Moore and his crewmates were fishing off the coast of Key West, Florida, when they hauled up the 15-foot-long (4.6 meters) shark with a net full of shrimp from 2,000 feet (610 m) of water. They hoisted the animal up and threw it back into the ocean. [On the Brink: Stunning Photos of Wild Sharks]

"I didn't even know what it was," Moore told The Houston Chronicle. "I didn't get the tape measure out, because that thing's got some wicked teeth, they could do some damage."

Fortunately, Moore was able to take pictures of the creature using the camera on a cellphone he had just bought. The fishermen reported the sighting to the National Oceanic and Atmospheric Administration (NOAA), where shark expert John Carlson was alerted.

"As a whole we know very little about these animals — how old they get, how fast they grow, where their nurseries are," Carlson told Live Science. Scientists haven't done a lot of deepwater surveys, so they don't know if the sharks are really rare, or just haven't been seen, he added.

The Key West shark was slightly smaller than the first one seen in the Gulf, which at 18 feet (5.5 m) long was the largest ever recorded, Carlson said. By contrast, most of the goblin sharks seen off Japan are only about 7 or 8 feet (2.1 to 2.4 m) in length. Also, the new animal is most likely female, because it lacked male sexual appendages known as claspers, Carlson said.

The first and only other goblin shark sighting in the Gulf was in 2000, when one got caught in a ghost crab net off the coast of Louisiana, Carlson said. And the only other sighting in the western North Atlantic Ocean was near a seamount east of Bermuda in the 1970s, he said.

They are usually found between water depths of 1,000 and 3,000 feet (300 and 900 m), where the animals probably feed on small fish and squid, spearing them with their sharp teeth, Carlson said.

Sharks are an ancient type of fish that date back to before the dinosaurs, but goblin sharks are a more recent lineage, Carson said. "They look more prehistoric, because they're adapted to life in the deep sea."

Carlson and his colleagues are currently working on a paper about the new shark sighting to submit for publication in a scientific journal.