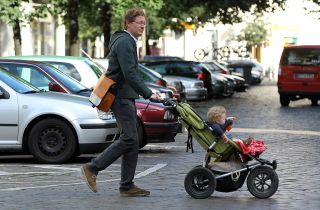 Turns out, men struggle about as much as women do to juggle work and family life.
(Image: © Sean Gallup/Getty Images)

Work-life balance is often addressed as a women's issue. Facebook executive Sheryl Sandberg's book "Lean In" was directed at women, Anne-Marie Slaughter's essay in The Atlantic was about "Why Women Still Can't Have It All" and Ivanka Trump's recent book "Women Who Work" dismissed the very concept of women seamlessly blending paid work and family.

But an expansive new study of work-life conflict reveals that "having it all" isn't just a female problem. In fact, men report practically equivalent levels of struggle to balance work and everything else as women do.

"It's just a huge disconnect, because the media almost always frames it as a women's issue," said study leader Kristen Shockley, a psychologist at the University of Georgia. In fact, Shockley told Live Science, studies on work-life balance and gender are "all over the place." Some find more struggles for women, and others for men; some find no difference at all. [Top 12 Warrior Moms in History]

To make sense of all this conflicting research, Shockley and her colleagues conducted a meta-analysis, in which they pooled the data from multiple studies on the same topic. More data makes for firmer statistics and a clearer view of the big picture.

Pulling from 352 separate studies, Shockley and her team analyzed survey data from more than 250,000 individuals who had answered questions about how much their work and family life were in conflict. In some cases, those questions addressed how much family life interfered with work responsibilities. In other cases, the questions covered how much work intruded on family.

Overall, the researchers found, there was almost no correlation between gender and the experience of work-family conflict.

"Compared to the way it's talked about, where you think women are experiencing so much more, it's pretty negligible," she said. "Men and women tend to experience similar levels of these conflicts."

"I'm not surprised by it at all," said Tammy Allen, a psychologist at the University of South Florida who was not involved in the research. One previous smaller meta-analysis had returned similar results, she said, and it was clear the research on the subject showed a less-clean-cut picture than depicted in media reports.

"The key takeaway is that gender is not a primary determinant of work-family conflict," Allen said. [7 Ways to Improve Your Work-Life Balance]

That doesn't mean men and women experience work-life-balance struggles the same way. In the study data, men worked more hours than women, and women were more likely to spend more time on family tasks, Shockley said. That should mean that men experience many more work intrusions on family, and that women experience many more family intrusions on work, she said. But because the analysis didn't see a stark difference in intrusions between the genders, something else may be going on. One possibility, Shockley said, is that women build stronger boundaries around work than men do, actively preventing overlap.

Or, she said, the kind of questions psychologists ask about work may not capture the full difference between men and women. For example, if women feel more guilt about their work-life conflicts than men do, it could have a real emotional effect — but one that wouldn't appear in the data. Shockley and her team plan to conduct studies in a laboratory environment in which men and women read about work-life conflicts and undergo physiological measurements, like blood pressure and heart rate, to see if one gender or the other gets more stressed.

Another possibility, Allen said, is that women get all the attention for work-life balance because they are more likely to talk about (and consume news about) their struggles than men are.

Discussing work-life balance as a women's issue may be selling both sides short, Shockley said. Employers may become more prone to thinking that women aren't committed to work and thus may hesitate to offer them jobs or promotions. Meanwhile, men could get shoehorned into a workaholic role they don't relish.

"Our data would suggest that men are struggling similarly to women in experiencing work-family conflict," Shockley said, "so the fact men aren't being talked about means they're missing out on some support."