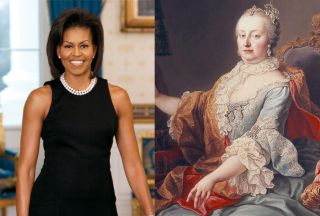 These moms took on roles far beyond the family.
(Image: © Public Domain.)

Mother's Day usually celebrates all of the sweet and loving moms out there. But there's another breed of moms that aren't all fresh-baked cookies and warm milk. These historical moms wanted what's best for their kids (and themselves). Some took a tough but fair approach to getting things done -- and others were more than willing to crush rebellions and murder family members to make things happen.

1. Olympias, Mother of Alexander the Great

Alexander the Great was one of the most successful military commanders of all time, securing an empire that stretched from the Mediterranean to the Himalayan Mountains. He seems to have inherited much of his moxie from mom.

Alexander's mother, Olympias, was the fourth wife of Alexander's father. Even in ancient times, Olympias got a bad rap: The historian Plutarch accused her of sleeping with snakes as part of her religious rites.

When Alexander's dad took another wife, a Macedonian named Cleopatra, Olympias went into voluntary exile, only to return after her husband was assassinated -- an event that some historians suspect Olympias had a hand in. She then had Cleopatra murdered, along with Cleopatra's infant child, helping secure her own son's succession to the throne. Olympias has also been accused of poisoning another child of Philip II, Philip III, who would survive with brain damage.

Cruel or not, Olympias' political mechanizations put her at odds with Macedonia's regent Antipater and his son Cassander while Alexander was off conquering the globe. Cassander's army eventually captured Olympias, and she was put to death in 316 B.C., outliving her famous son by seven years. 2. Cleopatra, Egyptian queen

Motherhood played a key role in the Egyptian queen's grip on power. Her romances and children with Julius Caesar and Mark Antony cemented her political influence in Rome and allowed her free reign to rule her own kingdom in Egypt. As a woman, Cleopatra needed a male consort to keep the throne; she found a convenient one in her son by Caesar, Caesarion. In 44 B.C., Cleopatra poisoned her current co-regent and younger brother, according to Stacy Schiff's "Cleopatra: A Life" (Little, Brown and Company, 2010). Three-year-old Caesarion became the official king of Egypt, with Cleopatra running the show.

She died at 39 after a 22-year-long reign, defeated along with Mark Antony by Caesar's legal heir, Octavian. After Cleopatra's death, Rome annexed Egypt. Caesarion was killed, but Cleopatra's three children by Mark Antony were spared. Her daughter, Cleopatra Selene, eventually became queen of what is now Algeria. 3. Wu Zetian, China's only empress

Wu Zetian broke all the rules. As a young teenager in the 630s, Wu became a low-ranking concubine to the Chinese emperor Taizong. When he died, Wu should have been shipped off to a Buddhist nunnery to live out her days. Instead, she became a concubine to Taizong's son and successor, Emperor Gaozong.

Wu then clawed her way up to the position of Empress, by having two sons and accusing the Emperor's current (childless) wife of killing her daughter -- though some historians have wondered if Wu didn't kill the baby herself. [Read: History's Most Overlooked Mysteries]

As the Emperor's health began to fail, Wu's influence grew. She became empress dowager and regent after he died. In 690, she broke the rules again, claiming the throne as her own, the only woman to rule China as an independent sovereign.

Unlike many of the other tradition-busting moms on this list, Wu Zetian didn't get punished for her ambition (or her tendency to murder rivals). She ruled until the age of 82, when, seriously ill and facing challenges for the throne, she relinquished power to her third son. She died soon after. 4. Catherine de Medici, mother of three kings

The mother of three French kings, Catherine de Medici didn't get off to a great start. An Italian married off to a French prince in love with another woman, de Medici "was at first this very marginalized person who could have been removed at any moment," Pavlac said.

But 10 years after her marriage began, she started producing heirs. When de Medici's husband, King Henry II, died, one of their sons became king at the age of 15, only to die a year later. That brought de Medici's 10-year-old son Charles IX to the throne and promoted de Medici to regent.

Catherine de Medici ruled over a France divided by civil and religious warfare. She was no political genius, Pavlac said, but "she did what she could to hold things together for her and her children."

In 1572, the Catholic Charles IX took a genocidal step, ordering Paris' city gates closed and thousands of visiting Protestants killed. Blame for the St. Bartholomew's Day Massacre, as it became known, fell into the queen mother's lap, cementing her reputation as treacherous and scheming. Nonetheless, she remained a powerful advisor to the next king, her third son Henry III.

"She was at least brighter than her sons," Pavlac said. "They made a lot of bad decisions."

5. Isabella I, unifier of Spain

Known in U.S. history for funding Christopher Columbus' journeys, Isabella was a driving force in unifying Spain. She straightened up her inherited kingdom of Castile, instituting criminal reform and bringing down the debt left to her by her brother, the previous ruler.

She's remembered with affection today, but Isabella was "a bit ruthless," Pavlac said. Part of her strategy to unite the kingdom involved compulsory Catholicism. Muslims and Jews had to convert or flee the country. In 1480, Isabella and her husband launched the Spanish Inquisition to enforce these edicts. All that, and she had six children to boot.

Like Catherine de Medici, Maria Theresa of Austria did not have an auspicious upbringing.

"She's basically raised without much training," Pavlac said. "She gets married to her cousin, and they don't expect anything from her."

Nonetheless, she was destined to inherit the Austrian throne. When the kingdom fell to her in 1740, it was broke and under attack from other European sovereigns. Pregnant (as she would be almost constantly over the next 20 years -- she had 16 children), Maria Theresa fought back. She held on to the Austrian Empire and during her 40-year reign would institute reforms in medicine, education and criminal justice.

In late 1800s Britain, Emmeline Pankhurst grew up in an activist home with parents who supported women's right to vote but believed their own daughter couldn't compete with the boys. A budding suffragette at age 20, she met and married a like-minded man. They had five children together, but Pankhurst continued her political work for women's rights. Many of her children would follow in her activist footsteps.

By 1903, Pankhurst became disillusioned with the lack of progress on women's suffrage. She founded the Women's Social and Political Union (WSPU). WSPU took agitating for the right to vote to new levels: First peaceful protests, then window smashing, and finally arson. Pankhurst went to jail multiple times, where she and other suffragettes launched hunger strikes to protest the conditions. Prison guards would often force-feed the women through tubes inserted into their noses and mouths. It's said that Pankhurst threatened guards with a clay jug to avoid the treatment.

Born into slavery, Harriet Tubman escaped to the North in 1849. But she returned into slave territory at least 13 times, escorting dozens of escaped slaves to freedom. She was known for being tough: She carried a revolver not only to ward off dogs and slave owners, but also to threaten frightened fugitives with should they lose their nerve. According to one tale, she once held at gunpoint a man threatening to turn back, telling him, "You go on or die."

Tubman wasn't a mother when she made these daring raids. But in 1874, she and her second husband adopted a baby girl named Gertie. Despite her heroism and work for the Union Army during the Civil War, she was denied compensation and would struggle with poverty for the rest of her life. Nevertheless, she continued working for equality: She supported women's suffrage and donated land to a church for a home for the elderly and indigent. 9. Jiang Qing, "Madame Mao"

Former actress and radical Jiang Qing married Mao Zedong in 1938. She played a small role in politics from the 1940s on, first as her husband's secretary, and then as head of the film section of the Communist Party's propaganda department. A pivotal figure in China's destructive Cultural Revoltion, Jiang made -- and punished -- many political enemies during the 1960s.

In the power transition after Mao died, Jiang was arrested along with the rest of the Gang of Four. She was sentenced to death but granted life imprisonment instead. As late as 1991, right before Jiang took her own life, Chinese newspapers reported that she was unapologetic in her support of radical revolutionary policies.

Her daughter, Li Na, regularly visited her mother in prison, the New York Times reported in 1991. But the daughter's refusal to request her mother's release reportedly drove a wedge between the two. "Even you do not care for me," Jiang is said to have told her child. "You are heartless." 10. Meena Keshwar Kamal, activist for Afghan women

Meena Keshwar Kamal was only 20 when, in 1977, she launched Afghanistan's first organized movement for women's rights -- the Revolutionary Association for the Women of Afghanistan (RAWA).

With Kabul University student Meena at its helm, RAWA protested both the Soviet occupation of Afghanistan and oppressive fundamentalists. Meena, a mother of three, also established schools and hospitals for refugee women in Afghanistan and Pakistan.

In 1987, Meena was assassinated in Quetta, Pakistan. Two Afghan men were hanged for her murder in 2002; RAWA and the prosecutor say the men were associated with KHAD, the intelligence and security agency of Afghanistan.

RAWA still works in both Pakistan and Afghanistan, helping refugee women and children and advocating for women's rights.

Made famous by Julia Roberts in the 2000 movie "Erin Brockovich," this single mom starting making a name for herself in 1991. While working as a law clerk, Brokovich discovered a link between chromium 6 released into groundwater by Pacific Gas and Electric (PG&E) and illnesses in the town of Hinkley, Calif.

The case against PG&E ended with a settlement of $333 million paid to Hinkley's residents, the largest direct action settlement in U.S. history. Brokovich has continued as an environmental crusader, bringing attention to allegations of industrial contamination across the country.

12. Michelle Obama, leader of the fight against fat

One of the famous stories from President Barack Obama's 2008 campaign is that his wife would only let him run for president if he quit smoking. That demand would foreshadow Michelle Obama's interest in health and her first lady focus on ending childhood obesity.

The Obamas are the first family since the Clintons to have children in the White House, and Michelle Obama is known for protecting her daughters from publicity. Meanwhile, she's focused on her "Let's Move!" campaign, planting the first vegetable garden at the White House since Eleanor Roosevelt's era and bringing Beyoncé on board with a music video encouraging kids to get their hearts pumping.