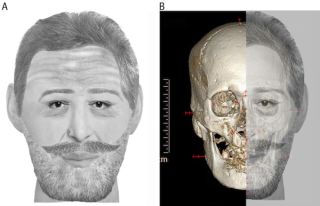 Four centuries after his death, King Henry IV of France is being laid to rest. Or at least his head is.

A team of multidisciplinary researchers announced today (Dec. 14) that a mummified head and its brain contents long thought to belong to the beloved king really are his. The head, which has been in the hands of private owners, had  been removed from Henry IV's body by revolutionaries in 1793 during a symbolic desecration of the tombs of the monarchs of France. [See Henry IV's mummified head]

Researchers, led by forensic medical examiner and osteo-archaeologist Philipp Charlier of University Hospital R Poincaré in Garches, France, compared the head with sculptures and portraits of Henry, who had been assassinated in 1610, and digitally reconstructed the face. The result was a dead ringer for the beloved king.

The same techniques could be used on the other mutilated remains of French royalty, the researchers wrote today in the British Medical Journal.

The story of how Henry IV's head became the subject of a forensic investigation can be traced to 1589, when his predecessor, Henry III, was assassinated by a fanatical monk. At the time, the designated heir to the throne was ruling Navarre, a small kingdom in the Pyrenees Mountains. Henry of Navarre was an accomplished tennis player who often wagered on the game, said Pierre Force, a professor of French and history at Columbia University who was not involved in the head identification.

"In the accounting books, there are entries in which the accountant of the kingdom had to pay because the king lost yet another game of tennis to some noble," Force told LiveScience.

Henry IV was also a Protestant, a fact that made his ascension to the throne of  Catholic France problematic. By the laws of succession, he would be France's rightful king, but to gain the throne he had to lay siege to Paris and eventually convert to Catholicism, Force said.

"That was a very spectacular gesture and one that brought peace to the country," Force said.

In 1598, Henry IV further cemented his reputation as a fair, peaceful king when he issued an edict guaranteeing religious freedom to Protestants. He became known as "good King Henry" for his popularity, and the "green gallant" for his attractiveness to women.

Off with his head

But in 1610, Henry IV, like his predecessor, lost his life to an assassin. The king was buried in the Basilica of Saint Denis in northern Paris, where his body stayed until 1793. French revolutionaries executed their own king, Louis XVI, that year and then turned their attention to the previous monarchs, opening their tombs and reburying their mutilated bodies in mass graves nearby. It was at this point that Henry IV lost his head.

"It fit into their idea of 'Out, out, damn spot,' of getting rid of, in a symbolic way, the historical burdens of monarchy," John Merriman, a Yale University historian and author of a number of books on European and French history, told LiveScience.

"It seemed, in context, a proper gesture," Merriman, who was not involved in the current study, added.

The head stayed in the hands of private collectors until recently, when Charlier and his colleagues began their investigation. The mummified head was well-preserved, and the royal brain lay undisturbed inside the skull. The head's owner was bald with bad teeth and a cataract in the right eye, the researchers found.

Radiocarbon dating showed that the head's age matched the king's date of death. The head had an irregular mole on the right nostril and an earring hole in the right earlobe, both features seen in portraits and statues of Henry IV. [See the ear, nose and hair of king]

The method of embalming, which involved leaving the brain intact, matched the historical records of the king's preservation. On the neck of the mummified head, researchers found a black band of carbon, which matched the ingredients that the king's embalmer had reported using on the body to absorb decomposition odors. The mummy's mouth was stuffed with plant matter, also used at the time to absorb odors.

The team could not recover uncontaminated DNA in order to match it to the king's descendants, but the researchers completed a digital facial reconstruction of the skull that matched the plaster mold of Henry IV's face made just after his death.

After all this poking and prodding, the remains of Henry IV will finally get some rest, according to Charlier and his colleagues.

"Now positively identified according to the most rigorous arguments of any forensic anthropology examination, the French king’s head will be reinterred in the royal basilica of Saint-Denis after a solemn funeral ceremony," the researchers wrote.