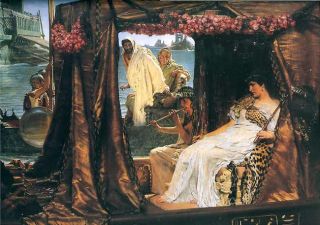 It's one of the Most Tragic Love Stories in History: Cleopatra and Mark Antony. She, the queen, seduced him, the powerful (and already married) general. It started a war, and the lovers committed suicide rather than be captured.

But where did they end up? Nobody knows.

Now archaeologists in Egypt are set to excavate a site they think might conceal the lovers' tombs. Evidence suggests the two were buried in a complex tunnel system under the Tabusiris Magna temple, 17 miles from the city of Alexandria, said Zahi Hawass, director of Egypt’s Superior Council for Antiquities and a man whose name appears in just about every press report having anything to do with Ancient Egypt.

[Read the Full Story at The Times of London]

In our new Etc. format, LiveScience provides links to articles of interest around the web. It is in Beta.