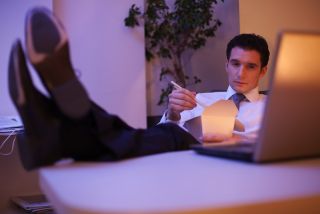 Losing out on sleep can be linked with eating poorly, studies suggest.
(Image: © Working late photo via Shutterstock)

"The job demands of men affect women, but we didn't find any evidence that the opposite was the case," said study co-author Lyn Craig, a sociologist at the University of New South Wales in Australia. "I think it's because women have the responsibility to make the family work around the male job." [6 Scientific Tips for a Successful Marriage]

Though men have dramatically increased the time they spend at home and with the family sincethe 1960s there's still no contest: Women, on average, spend nearly 5 more hours a week on household chores than men do and spend double the amount of time tending to young childrens' physical needs, according to the 2015 American Time Use Survey.

But it's difficult to tease out the possible effects of these dynamics using typical data. Some studies show that women feel more pressed for time, for instance, but those studies typically study individuals, without comparing two halves of a couple and seeing how one person's choices affect the other's.

To get a better understanding of those couple dynamics, Craig and her colleagues looked at the 2006 Australian Time Use Survey, which included 756 Australian couples with children at home. About a quarter of these households had just a man as the sole breadwinner, about a quarter had two full-time working parents, and a little less than half had a wife who worked part time and a husband who worked full time. Nearly four in 10 of the fathers worked more than 50 hours a week.

The survey asked people to record 5-minute time diaries over one or two days, describing their activities and answering how often they felt rushed or pressed for time.

When men worked long hours (more than 50 hours a week), their wives reported feeling more rushed and spent more time multitasking on household duties. This was the case no matter whether the woman was not employed outside the home, employed full time or employed part time, the researchers said.

However, when women worked longer hours, they spent more time multitasking with household chores and cut back their uncontaminated free time.

What's more, men who work on the weekends still manage to preserve their pure leisure, while women who work evenings and weekends have less uncontaminated leisure time. [13 Facts on the History of Marriage]

Interestingly, men didn't seem to mind their contaminated leisure as much as women did.

When men work long hours, that stress rubs off on their spouses, Coontz said.

And if men are working long hours, that means they aren't there for chores that must be done at certain times, such as cooking dinner or giving kids a bath, Coontz told Live Science. That means women are left with the brunt of these so-called "low-control" tasks, she said.

But the main issue is that full-time workers have longer hours than in generations past, Craig said. And that may be bad news for familial well-being.

"As workplaces are becoming more demanding in recent years and couples are spending more time in the workforce, it's having wash-out effects on the household which are probably not that good in the long run," Craig said.

Coontz agreed. While some of these patterns can be hashed out within the family, for the most part the problem sholdn't "be solved at an individual level," Coontz said.

Instead, the underlying problem is that workers now are facing longer hours than ever, with scant paid paternity leave or maternity leave, sick leave or vacation, she added.

"It shouldn't have to be that women and men fight over how to equally share three full-time jobs," Coontz said.