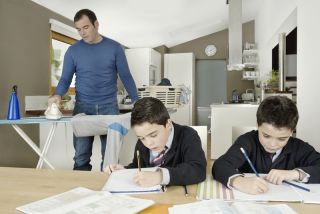 Fathers are taking on more household responsibilities than 50 years ago.
(Image: © MJTH, Shutterstock)

Despite magazine covers by the dozens focusing on women's struggle to balance work and family, men are nearly as frazzled by the same challenge, a new Pew Research report finds.

Half of working dads say they find balancing work and family responsibilities "very" or "somewhat" difficult, compared with 56 percent of working moms. Dads are also just as likely as moms to say they wish they could stay at home with the kids full-time.

The data comes from Pew Research Center surveys conducted in 2007 and 2012, combined with time-use studies dating back as early as 1965. The two surveys queried nationally representative samples of U.S. adults, including Spanish-speakers. The time-use surveys required participants to keep diaries of their daily activities.

Dads do more housework these days than they used to, spending an average of 10 hours a week on household duties (other than childcare) in 2011, compared with only 4 hours a week in 1965. Moms' roles have changed, too. In 1965, moms averaged about 8 hours of paid work a week, compared with 21 weekly hours in 2011. [Top 12 Warrior Moms in History]

In surveys, both men and women are equally likely to say they wish they could stay home full-time with the kids. But dads are more likely than moms to say they want a full-time job. Men also value pay over workplace flexibility, while women do the opposite.

The trouble with work-life balance

Work-life balance isn't just a woman's problem, the Pew surveys found. Forty percent of working moms and 34 percent of working dads said they always feel rushed. Fathers are more likely to say they don't feel they get enough time with their kids, with 46 percent offering that response compared with 23 percent of moms.

Nevertheless, parents give themselves good marks for their efforts, with 24 percent saying they have done an excellent job raising their kids and 45 percent saying they've done a "very good" job. Only 6 percent say they're just "fair" or "poor" parents. Working moms gave themselves slightly better parenting grades than stay-at-home moms, the survey found. About 78 percent of full- or part-time working moms say they're "good" or "excellent" parents, compared with 66 percent of moms who aren't employed.

The time crunch influences how moms and dads feel about their parenting performance. Parents who say they spend the right amount of time with their kids are three times more likely than those who say they don't spend enough to call themselves excellent parents.

The full report is available at the Pew Research Center website.