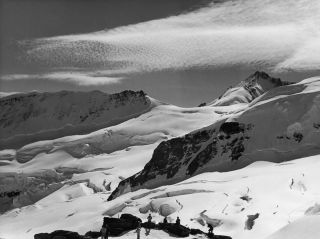 The mountain range bordering the Jungfrau Glacier in Switzerland, as viewed from the Jungfraujoch.
(Image: © Terry Chambers/Fox Photos/Hulton Archive/Getty)

Last week, during a routine inspection tour, a ski-lift technician for the Swiss adventure resort Glacier 3000 found what he thought was a collection of black rocks near the Tsanfleuron glacier in the western Bernese Alps, reported The New York Times. Upon close inspection, though, he discovered that the rocks were, in fact, mummified bodies.

DNA testing has now confirmed that the bodies are those of Marcelin and Francine Dumoulin, spouses that had been lost ever since they left home to feed their cattle the morning of Aug. 15, 1942. So how did the bodies become preserved in the glacier?

Whether the Dumoulins fell into a crevasse remains a mystery, but it may be that a snowstorm covered them, making it impossible to find the couple by sight. But regardless of what happened, the water inside their bodies eventually froze. Still, the ice crystals in their tissues likely didn't stay put, said Dan Fisher, a professor of Earth and Environmental Sciences at the University of Michigan, who was not involved in identifying the remains. [25 Grisly Archaeological Discoveries]

"The tissue starts out with a high water content, but that water would freeze, and in many cases,actually under those frozen conditions, when surrounded with [air] with low water-vapor content, the ice crystals in the tissue can sublimate," Fisher told Live Science. Sublimation is the process by which solid ice transitions directly into water vapor without ever becoming liquid. In other words, the tissue dried out, Fisher said.

As such, it was both the cold and the dry conditions that inhibited the work of bacteria and fungi, as well as the chemical processes that would normally break down human tissue, leaving the bodies well-preserved.

Additionally, the bodies remained relatively intact likely because the Tsanfleuron glacier may be relatively stable, even though glaciers, rivers of slow-flowing ice, are in constant motion. They advance when more ice and snow are added than lost, and retreat when more ice and snow is lost, according to Martin Callanan, an associate professor of archaeology at the Norwegian University of Science and Technology, who was not involved in identifying the remains.

This retreat makes it possible to glimpse even further back into the past. In 2003, less than 20 miles (32 kilometers) away from Tsanfleuron, at the Schnidejoch glacier, coins, leather, a piece of a wooden bowl and a bow and arrows were among items discovered. Those objects date from Medieval times, all the way back to nearly 4500 B.C., during the Neolithic age.

"There is a definite increase in the number of objects that we're finding and in the number of different regions that are reporting finds," said Callanan, mentioning that he couldn't speak to whether this was true specifically for bodies as well.

Callanan attributed this increase in discoveries, in part, to global warming. Global temperatures in 2014, 2015, and 2016 each broke the record for the hottest year on the planet since recordkeeping began in 1880, researchers from the National Oceanic and Atmospheric Administration told Live Science. This warming is causing glaciers worldwide to shrink, a 2016 study in Nature Geoscience confirms with 99 percent certainty.

The recent discovery and identification of the Dumoulins is a great relief to the couple's daughter Marceline Udry-Dumoulin. Udry-Dumoulin, one of seven children, was only 4 when her parents went missing. After their disappearance, local rescue teams searched crevasses for more than two months but found nothing.

"I climbed the glacier three times afterwards, always looking for them," Udry-Dumoulin told the Swiss newspaper Le Matin. "I kept wondering if they had suffered and what had become of them. Now I have the pleasure of having answers to these questions."