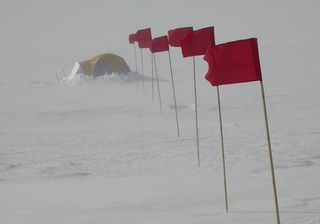 Antarctica is one of the coldest, snowiest parts of the globe, but there may actually be less snow across the surface of the planet's southernmost continent than scientists originally thought.

Researchers studying areas of eastern Antarctica where snow is often stripped off the surface by wind, recently found that the powerful gusts are actually vaporizing massive amounts of snow, rather than blowing and redistributing it elsewhere. The findings have implications for future measurements of snow accumulation in Antarctica and how the continent may contribute to rising global sea levels.

The new study shows that 90 percent of snow in areas called scour zones, which make up about 7 percent of Antarctica, is being vaporized. That's an estimated 80 billion tons of snow per year that is being removed from the continent altogether, researchers said. [Album: Stunning Photos of Antarctic Ice]

Scientists knew that snow was being removed from the ice sheet, but did not know how quickly it was happening, where on the continent it was occurring or to what degree wind played a role in these processes, said lead study author Indrani Das, an associate research scientist at Columbia University's Lamont-Doherty Earth Observatory.

"Thus they did not know the total impact of the scouring process on the ice sheet’s mass budget," Das told Live Science.

Das and her colleagues discovered that current regional climate models are overestimating the amount of snow that accumulates on the wind-scour zones by about 90 percent each year. This means that a total of 80 billion tons of snow each year is removed from the surface in these regions and is not being accounted for by climate models.

Das suspected there were problems with existing climate models several years ago, so she began looking at aerial snow radar data and ice cores collected in 2009 by a team of American and Norwegian scientists to calculate actual snow accumulation. She then compared her calculations to estimates produced by regional climate models and found that the models overestimated the amount of snow on the ground.

Regional climate models are currently based on measurements of snow accumulation, snow melt and past accumulation rates calculated from ice core samples, which are long columns drilled out from Antarctic ice sheets that contain records of past climate conditions. However, powerful winds, known as katabatic winds, are not really accounted for in these samples.

Katabatic winds, which only exist over icy regions, are near-surface winds that increase in speed as they move from steeper ice slopes on the interior of the continent down toward the coast. These speedy winds scour snow off the surface of ice sheets and create these scour zones. While scientists knew about this phenomenon, they previously thought that much the snow was being blown away and deposited elsewhere on Antarctica.

Instead, the scoured snow is being obliterated, the scientists said.

"Sublimation is changing snow into water vapor directly without melting first," Das told Live Science. This means that some portion of the continent's annual snowfall is actually taken out of the snow mass equation altogether. The findings also explain why Das encountered inconsistent estimates of snow mass between her calculations and regional climate models.

Fortunately, scientists working on the climate models are already aware that they have problems. "They have been working on adding in this [sublimation process] to the model," Das said. "It is definitely a work in progress."

Scientists that work to fine-tune these models have been trying to improve them based on a better understanding of the physics of wind scour and new data that's been collected from Antarctica in recent years.

Das added that she and her colleagues have been trying to improve their radar equipment and they want to obtain more recent ice cores to help their understanding of this dynamic wind-scouring process.

Taking all of this into account will help give scientists more accurate information that will better inform regional climate trends and also help researchers determine the best places to collect ice cores to document Antarctica's climate record (i.e, not where snow is being stripped from the ice sheet).

The research was published Monday (Oct. 12) in the journal Geophysical Research Letters.

Editor's Note: This story was updated to clarify the location of scour zones across Antarctica, and the amount of snow being vaporized in these areas.