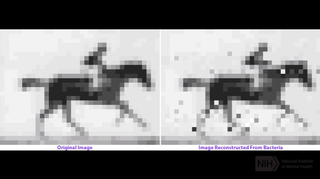 A still image from a movie that was stored in bacterial DNA. The image on the left is the original, and the image on the right is reconstructed from the data stored in DNA.
(Image: © National Institute of Mental Health)

If you thought flash drives were small, wait until you see this: Researchers have encoded the data to make a short video into the DNA molecules of bacteria. They also were able to retrieve the information from the genetic code and play back the movie.

To accomplish this feat, the first of its kind, the researchers started with five frames from a classic 1870s movie of a racehorse. Then, they broke these frames down into their pixels and used DNA to create a code for each pixel. The code contained information about the color of the pixel and its location within the image.

Then, the researchers inserted short DNA fragments containing these codes into bacteria, and the bacteria incorporated the fragments into their genome. (Bacteria do this naturally.) Later, the scientists sequenced the bacterial DNA to reconstruct the movie with 90 percent accuracy. [Genetics by the Numbers: 10 Tantalizing Tales]

Although it may seem like this project would have very limited applications to real life, researchers say they have goals far beyond the scope of the current study.

"The point is not to store videos in bacteria," said study co-author Seth Shipman, a postdoctoral fellow at Harvard Medical School in Boston.

Instead, the researchers ultimately want to create "molecular recorders" capable of recording the events inside cells as they play out. This could give researchers insight into cellular events that are hard to observe in real time, like the processes that occur during brain development.

"We want to turn cells into historians," Shipman said in a statement. "We envision a biological memory system that's much smaller and more versatile than today's technologies, which will track many events nonintrusively over time."

The study was published online July 12 in the journal Nature.