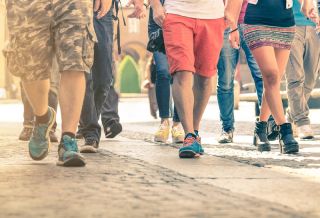 If you take 10,000 steps a day, you're well ahead of the average person on Earth, who takes only about 5,000 steps a day, according to a new study that used smartphone data to track step counts from around the world.

The study analyzed anonymous smartphone data from more than 700,000 people in 111 countries or territories. All the participants used the smartphone app Argus, which tracks physical activity (including step counts) using the phone's accelerometer. Users' steps were tracked for 95 days, on average. (Most of the study's analysis relied on data from the 46 countries and territories that had at least 1,000 users each.)

"If you think about some people in a country as 'activity rich' and others as 'activity poor,' the size of the gap between them is a strong indicator of obesity levels in that society," Scott Delp, a professor of bioengineering at Stanford University and a co-author of the study, said in a statement.

For example, Sweden had one of the smallest gaps between the most and least active people, and also has one of the lowest obesity rates. In contrast, the United States had a large gap between the most and least activity people (it was fourth from the bottom in overall activity inequality), and also has a relatively high obesity rate.

The researchers additionally found that places that are more "walkable" (i.e., where it's easier to get around on foot) tend to have lower levels of activity inequality.

"In cities that are more walkable, everyone tends to take more daily steps, whether male or female, young or old, [of] healthy weight or obese," said study co-author Jennifer Hicks, the director of data science for the Mobilize Center at Stanford. This finding shows the importance of the "built environment" (or the human-made surroundings where people live and work) in influencing activity levels and health, the researchers said.

The study was published online July 10 in the journal Nature.