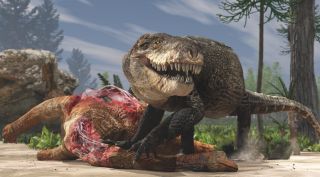 The ancient croc Razanandrongobe sakalavae likely would have used its serrated teeth to crunch into tendons and scrape meat from bone of prey.
(Image: © Fabio Manucci )

What has a head like a crocodile, sports teeth like a T. rex and is the oldest of its kind?

A mysterious Jurassic predator from Madagascar.

New fossil remains reveal a meters-long crocodile-like monster, called Razanandrongobe sakalavae, that lived more than 163 million years ago. Turns out, the beast is the oldest example of the notosuchians, a group of animals with a bizarre mash-up of traits, from armadillo-like armor to crocodile-shaped bodies to erect limbs that gave their bellies clearance from the ground. R. sakalavae is the oldest-known notosuchian by a whopping 42 million years, researchers reported in the open-access journal PeerJ on July 4. [Image Gallery: 25 Amazing Ancient Beasts]

Previously, R. sakalavae was known from just seven loose teeth and a portion of an individual's right jaw with three additional teeth embedded in it. The fossils came from the Mahajanga Basin in northwestern Madagascar. Now, researchers from the Milan Natural History Museum in Italy and the Museum of Natural History, Toulouse in France have analyzed a handful of new fossils — most found in the 1970s in the same location — that have been sitting in their museum collections for decades.

The fossils turned out to hold more secrets of the notosuchians. The remains consisted of important portions of the anatomy, at least as far as species identification is concerned: an almost-complete portion of the right upper jaw, a piece of the left lower jaw, another portion of the jaw containing three teeth that had not yet erupted from the jaw and a large tooth crown. Another five fragments of skull from the same location may belong to the same species, the researchers wrote.

The fossils revealed a fearsome beast with a mouthful of 6-inch-long (15 centimeters) teeth. These serrated teeth resembled those of T. rex, the researchers wrote, indicating that the animal likely used these chompers to crunch into tendons and scrape meat from bone. A tentative reconstruction of the animal's skull indicated that its head was about 3.3 feet (1 meter) long. That may make it the largest notosuchian ever found as well as the oldest, the researchers reported.

"Like these and other gigantic crocs from the Cretaceous, 'Razana' could outcompete even theropod dinosaurs at the top of the food chain," study author Cristiano Dal Sasso of the Milan Natural History Museum said in a statement. Theropods are the familiar two-legged dinosaurs that include the tyrannosaurs as well as other carnivores like the dilophosaurs. The researchers don't know much about the crocodilian's diet, but it was the largest land-based carnivore in its ecosystem, they wrote, and may have been a top predator that chowed down on dinosaurs.

"Razana" is a rare representation of notosuchians in the Jurassic. Given what they know about these animals and their close relatives from later eras, paleontologists have long suspected that this group arose by the beginning of the Jurassic, some 201 million years ago. But the fossil record of notosuchians — and of their early evolution — in the Jurassic has been all but nonexistent. Because of this missing record, researchers call the Jurassic notosuchians a "ghost lineage."

The age of the fossils and their location in Madagascar suggests that notosuchians originated in southern Gondwana, the researchers wrote, the supercontinent that eventually split into Africa, South America, Antarctica, Australia, the Indian subcontinent and the Arabian Peninsula.