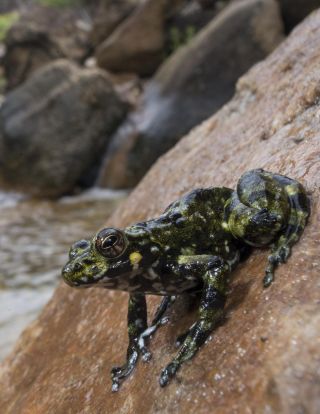 A new study finds that frog lineages diversified soon after the extinction of the dinosaurs.
(Image: © Brian Freiermuth)

The mass extinction that wiped out the dinosaurs paved the way for a totally different type of creature to take over — frogs.

The slimy amphibians exploded in numbers and diversified in the millions of years after a massive asteroid wiped out the dinosaurs, taking advantage of the huge holes in the ecosystem that extinct creatures left behind, a new study suggests.

"Frogs have been around for well over 200 million years, but this study shows it wasn't until the extinction of the dinosaurs that we had this burst of frog diversity that resulted in the vast majority of frogs we see today," study co-author David Blackburn, associate curator of amphibians and reptiles at the Florida Museum of Natural History on the University of Florida campus, said in a statement. "This finding was totally unexpected." [Wipe Out: History's Most Mysterious Mass Extinctions]

The dinosaurs reigned for about 175 million years, during a period known as the Mesozoic era. Then, about 65 million years ago, a massive asteroid wiped them out.

Frogs, meanwhile, have been around for about the past 200 million years, but how and exactly when species of frogs emerged and diversified has been murky. Some studies suggested that the major frog families — Hyloidea, Microhylidae and Natatanura — diverged sometime in the Mesozoic era.

Planet of the frogs?

To answer that question, Blackburn and his colleagues analyzed 95 genes from each of 156 different frog species alive today. They then combined this data with previously reported data from another 145 species. From this data, they created an evolutionary tree mapping out the history of all frog families.

Then, the team pored over frog fossils to anchor genetic changes in frogs to specific points in time. The team found that the three major families of frogs all diverged around the same time, the researchers reported today (July 3) in the journal Proceedings of the National Academy of Sciences. It turned out, this explosion in frog species, and the divergence of the major frog families, occurred right at the KT boundary (the boundary between the Cretaceous and the Paleogene periods), soon after the dinosaurs went extinct. Though the findings contradict previous research, they also make sense because there were so many holes in the ecological niches vacated by dinosaurs and other affected species, study co-author David Wake, an evolutionary biologist at the University of California, Berkeley, said in a statement.

"We think the world was quite impoverished as a result of the KT event, and when the vegetation came back, angiosperms dominated. That's when trees evolved to their full flowering," Wake said. "Frogs started becoming arboreal. It was the arboreality that led to the great radiation in South America in particular."