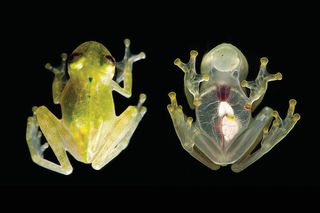 You don't have to be a biologist to see how so-called "glass frogs," a group of largely arboreal tree frogs found in parts of Central and South America, earned that unusually descriptive name — their transparent underbellies are windows into their tiny bodies, revealing many of the organs tucked under their skin.

And in a new species recently discovered in Ecuador, the frog's see-through skin on its underside extends over its chest as well, fully exposing its wee little, dark-red heart.

Researchers found the new species, which they named Hyalinobatrachium yaku, in three locations in Ecuador's Amazonian lowlands, in the northeastern part of the country, at elevations of between about 980 to 1,150 feet (300 to 350 meters). [40 Freaky Frog Photos]

All frogs in this genus have undersides that are completely transparent, but having a heart that is completely exposed is very unusual, the researchers said. Only two other species of glass frogs have hearts as visible as H. yaku's, and DNA analysis revealed that they weren't the newcomer's closest relatives, the scientists wrote in a study describing their new discovery.

Distinguishing between Hyalinobatrachium species can be challenging, because the frogs tend to be physically very similar, according to the study authors. In the case of H. yaku, distinctive vocalizations and dark-green spots on its head told the researchers that this was a new species. Genetic analysis confirmed that H. yaku was most closely related to H. pellucidum, a glass frog found in Ecuador and Peru.

The new species measures around 0.8 inches (21 millimeters) in length, of which about 37 percent is its head. Adults are colored "apple green to yellowish green" spotted with yellow, and on their backs they have a few "well-defined dark green spots," which are unique to this species, according to the study authors.

Two of the sites where the scientists caught the frogs were quite distant from each other — about 68 miles (110 kilometers) apart — suggesting that the frogs' range could extend far beyond the locations where the specimens were found. Because the frogs are arboreal, and therefore harder to find, it's also possible that they are abundant in the region, even if they were only recently detected for the first time, the researchers wrote.

It is also likely that there are more glass frog species in the region that are yet to be discovered — and human activity could pose a serious threat to this amphibian group. Federal plans in Ecuador to expand operations for oil extraction could pollute local streams and degrade the frogs' habitat, while roads could divide and isolate populations, increasing the risk for extinction, the scientists cautioned in the study.

The findings were published online May 12 in the journal ZooKeys.