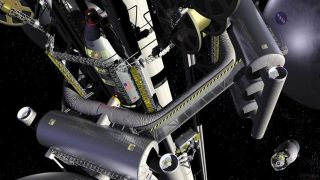 Some of today's biggest science innovations are happening at the smallest scales.

Nanotech — "nano" is short for "nanometer," referring to length scales in billionths of a meter — describes technologies that are built to perform complex tasks, but at the scale of molecules or even atoms. To put that into perspective, a structure called a nanotube is 1 nanometer in diameter — about 100,000 times smaller than the width of a human hair, according to the National Nanotechnology Initiative.

Thanks to nanotech, engineers can design microprocessors for your smartphone that are smaller and more efficient than ever. In addition, gadgets in the not-too-distant future could incorporate sophisticated security safeguards powered by nanotech. Scientists are also exploring how nanotech can deliver medical treatments that target genes themselves. Or build cables strong enough to support an elevator in space, according to a panel of experts at Future Con, a conference highlighting the intersection between sci-fi and cutting-edge science that was held June 16-18 in Washington, D.C. [5 Amazing Technologies That Are Revolutionizing Biotech]

Medical researchers who are looking to build machines that can operate at the nanoscale need to "follow the blueprints of biology," Lloyd Whitman, chief scientist at the National Institute of Standards and Technology, told the audience at the panel titled "Indistinguishable from Magic: Nanotech in Sci-Fi" on June 17.

Any type of robot crafted at the nanoscale won't look like a typical robot — it'll look more like a virus, Whitman said. Evolution has already figured out how to construct functional, autonomous forms even at the microscopic level, and engineers can learn much from studying these minuscule success stories to inform their own work on particles that perform on the nanoscale, Whitman said.

Looking to viruses for inspiration can be particularly helpful for scientists investigating potential nanotech uses in medicine and human health, according to panelist Jordan Green, an associate professor of biomedical engineering, ophthalmology, oncology, neurosurgery, and materials science and engineering at the Johns Hopkins University School of Medicine in Maryland.

Viruses affect our genome by inserting their own genes into our cells in order to replicate themselves, Green said. Could researchers perhaps design a synthetic particle capable of delivering genetic information the same way? Particles made of non-toxic and water-soluble materials could be engineered to deliver DNA directly to cells, coding them into RNA molecules outside the nucleus, where they would be translated into proteins to convey a function, according to Green.

"This could change a cell's genetic makeup, or it could have a short-term therapeutic effect," he said.

For people with genetic diseases, such as hemophilia or cystic fibrosis, this approach could deliver healthy genes to target cells and repair the errors in their DNA that cause the disease, Green told the panel audience.

Nanotech could also inform more effective cancer treatments, Green said. A mutation in cancer cells deactivates the control switch that tells them to stop growing, but targeted gene therapy using nanoparticles could reactivate their self-destruct button, halting cancerous growths in their tracks, according to Green.

By directing nanoparticles to specific tissues and delivering precise instructions to just the right cells, "nanoengineering and nanotech in medicine can help medicines be more precise," he explained.

Nanotech could also help to realize an idea that has fascinated and stymied engineers since at least the late 19th century — how to build an elevator that extends from Earth into space, Lourdes Salamanca-Riba, a professor in the A. James Clark School of Engineering at the University of Maryland, told the Future Con audience.

One type of space elevator could run up a long cable anchored at the equator and attached to a floating "base" outside Earth's atmosphere and in geosynchronous orbit, Salamanca-Riba said. The cable would need to cover approximately 10,000 miles (66,000 kilometers) in length, and it would have to be made from a substance that's exceptionally strong and light — or it would collapse under its own weight, she added.

Carbon nanotubes — cylindrical nanostructures made from carbon atoms — are extremely strong and only one atomic layer thick, and could be a suitable material for these cables, Salamanca-Riba said.

A floating space station that's accessible by elevator would make it significantly easier for astronauts to travel to the moon or other cosmic regions, Salamanca-Riba said. And while a space elevator would be expensive to build, once in place, it would significantly reduce the cost of transporting payloads into orbit — from thousands of dollars per kilogram to just a few hundred dollars per kilo, she added.

However, it may be some time before researchers can produce the thousands of miles of carbon nanotubes that would be required to tether a space elevator — currently, they exist only in lengths of a few centimeters, Salamanca-Riba said at the panel.