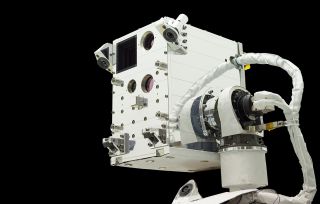 The Raven payload, before its integration on the International Space Station in February 2017.
(Image: © Image courtesy of NASA/Chris Gunn)

Uncrewed satellites orbiting Earth and other planets in the solar system travel at thousands of miles per hour, their missions spanning years or even decades. They were built to last on their own, but how might space agencies service them if parts break down, or if they run low on fuel?

That's where space robots come in, according to panelists speaking at Future Con, a convention held in Washington, D.C., from June 16-18, where talks and exhibits explored the intersection of cutting-edge science with science fiction and popular culture.

At a June 18 panel "Robots in Space," NASA scientists explained how engineers are designing robots to perform a seemingly impossible precision task in space — refueling satellites that are traveling at thousands of miles per hour. [10 Crazy New Skills That Robots Picked Up in 2016]

Space robots are not new to science fiction, and plenty of machines today perform complex scientific tasks on Earth and in space — from surgically correcting eye defects to helping astronauts on the International Space Station (ISS) during spacewalks. Several robots even dwell on the surface of other worlds, such as the Mars rovers: the now-defunct Spirit and the still-active Opportunity and Curiosity.

Experts from NASA's Satellite Servicing Projects Division (SSPD) appeared at Future Con accompanied by a scale model of a space robot called Raven, part of a mission that will be capable of tracking, locating and refueling autonomous spacecraft — including satellites that were not designed to be serviced in space, according to a description on the NASA mission website. The mission, Restore-L, is expected to launch in 2020, NASA reported.

The Raven module recalls the three-eyed raven from the HBO series "Game of Thrones." It also has a trio of "eyes," or sensors, which gather data in visible and infrared wavelengths, and through lidar (radar detection of laser-generated light pulses).

Recently, Raven was sent to the ISS to gather data, Future Con panelist Ross Henry, project manager for the Raven module at SSPD, told the audience. By "watching" vehicles with its three sensors as they approached, docked and departed, Raven gathered valuable information about how spacecraft move, which will help NASA engineers prepare it to locate and track fast-moving satellites, Henry said.

Since the beginning of the U.S. space program, approximately 5,000 satellites have been engineered, of which around 1,400 are in orbit now. Of those, only one is designed to be refueled — the ISS, according to Benjamin Reed, a deputy project manager for NASA's Satellite Servicing Capabilities Office.

A robot's work is never done

Spotting most satellites in the blackness of space is enormously difficult, because they're not "retroreflective," meaning they don't reflect light back to the light source, Reed said. Picture a roadside stop sign — its surface is treated to scatter light so you can see it at night, even when the pole holding it up is effectively invisible. Of all the satellites in orbit, only the ISS and the Hubble Space Telescope are retroreflective, Reed said.

And finding the satellite is just the beginning. A refueling mission will also need to get close to the fast-moving spacecraft — no small feat when both are traveling around 16,400 mph (26,393 km/h), Reed said.

After Restore-L is in position, the tricky work of refueling begins. Robotic arms controlled by operators in Maryland will cut through a protective shield on the satellite, remove the thermal cover, unscrew several protective caps and pump in highly explosive fuel, Reed told the panel audience. And then Restore-L needs to replace all those caps and covers, in the reverse order.

Once the servicing mission is ready to go, NASA probably won't deploy a squadron of refueling robots — more likely, it will design an individual spacecraft capable of refueling a dozen or more satellites, according to Reed.

The project's challenges are considerable, but the progress made by NASA scientists in recent decades is no less incredible, Reed told the audience. The first in-space servicing mission — a spacewalk to repair a damaged solar shield on Skylab — took place in 1973, and the 40 years that followed saw the design, launch and subsequent servicing of Hubble and the ISS — servicing conducted by both humans and robots, he said.

"What's the next 40 years going to bring? I don't know, but it sure is going to be fun to help make that happen," Reed said.