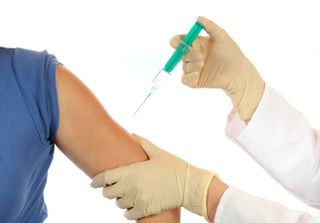 A nanotech-based vaccine that can be applied to the body's mucus membranes could be an effective, needle-less vaccination method, a new study in mice shows.

In experiments, nanocapsules loaded with a vaccine and deposited in the mice's airways were able to get past the mucosal barrier, enter the bloodstream, and elicit an immune response in the vaccinated animals, according to the study published today (Sept. 25) in the journal Science Translational Medicine.

The mucosal surfaces of the body – which cover the insides of the nose, lungs and reproductive tract— are the point of entry for many pathogens. While vaccines can be administered this way, for example, with nasal sprays, the lungs often clear away the vaccine before it can provoke an immune response.

The nanocapsules the researchers used were shown to be strong enough to not dissolve, or be cleared out by the lung mucus. The researchers' aim is to make a vaccine that could be administered by an inhaler, study researcher Darrell Irvine, a professor of materials science and engineering at the Massachusetts Institute of Technology, told LiveScience. [5 Crazy Technologies That Are Revolutionizing Biotech]

"Many pathogens infiltrate the body and initiate infection via mucosal surfaces. Hence, eliciting cellular immune responses at mucosal portals of entry is of great interest for vaccine development," the researchers said in their study.

The nanocapsules used in the study consisted of small shells, about 1,000 times smaller than a human hair, made of fat molecules.

The technique "was safe and well tolerated in mice," the researchers said.

More than just goo, mucus is part of the body's immune system -- it is one of the outermost barriers that prevents foreign particles and pathogens from entering the body. It traps germs in its sticky layers, and contains enzymes that dissolve potentially harmful pathogens and proteins.

In the study, the researchers vaccinated mice by depositing a fluid containing the nanocapsules directly onto the surface of the trachea. The compared the mice's immune response to that of a vaccine injected under the skin, which is not a mucosal surface. The mice received two doses of vaccines a few weeks apart.

The results showed the mice produced a widespread immune response to the vaccine deposited in their windpipe. Immune cells, including those that can recognize and attack the pathogen, increased not only in the lungs, but also at distant places in the mice's bodies such as the intestine, vaginal tract, blood and spleen.

If the mucosal vaccine proves effective in larger animals, it could be useful for creating vaccines against pathogens such as influenza or human papillomavirus (HPV) that invade the body through mucosal surfaces of respiratory and reproductive tracts, the researchers said.