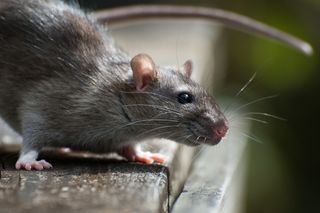 Villages in a southwestern region of Myanmar were recently deluged with thousands of rats, according to local officials. The swarm of vermin descended following heavy flooding that may have driven them from their nests in nearby caves, the Myanmar news website The Irrawaddy reported.

In two locations — the towns of Zee Chaing and Kyauk Chaung — villagers, police officers, health officials and other government representatives killed over 1,000 rats on June 5, with the remainder retreating to the area's forests, according to The Irrawaddy.

"There were so many rats that it was impossible to count them," Soe Soe Min, a police lieutenant with the Haigyikyun Central Police Station, told The Irrawaddy. "They ate bamboo plants, and were staying in bushes and trees outside the villages," Min said. [Rats and Lizards and Monkeys, Oh My! 9 Islands Ruled by Animals]

A photo shared by The Irrawaddy on Twitter shows dozens of dead rats — a fraction of those that were killed, according to local reports.

Hordes of opportunistic rats "with white bellies" first appeared on June 3 on Haigyi Island in the village of Zee Chaing, and then emerged on June 5 in Kan Chai village and Kyauk Chaung village, the Democratic Voice of Burma (DVB) reported.

Volunteer exterminators from the infested villages labored from dawn to dusk dispatching the rodents for a bounty of 50 Myanmar kyat (about 4 cents) per animal, using "sticks, slingshots and rocks," according to Agence France Presse (AFP). Officials also sprayed pesticides in the area.

By evening, the rats had retreated to trees "like flocks of birds," a villager told DVB, and in the end a total of 1,667 rats "were destroyed and systematically buried underground," the Myanmar Ministry of Information said in a statement.

Sudden and unexpected as this rodent swarm was, similar devastating rodent plagues appear in half-century cycles in Myanmar's Chin State, which is located a bit farther to the north than the region that experienced the recent outbreak.

When the area's bamboo forests flower every 50 years, the excess of available food spurs a massive population explosions in rats, leading to hordes of hungry rodents that blanket and decimate farmlands, according to a case study published in 2010 in the book "Rodent Outbreaks: Ecology and Impacts" (International Rice Research Institute).

The Chin people call the cyclical event "maudam" — "mau" is the Chin's word for bamboo and "dam" translates as "rat famine," according to the case study.

During seed shedding, the high availability of food enhances the breeding performance of female rats; consequently, the rat population increases within a short time," the study authors wrote.

But once the bamboo seeds germinate and seedlings begin to grow, the hungry rats look elsewhere for food, which leads them to villagers' rice fields. Many farmers lose between 50 and 100 percent of their rice crops during these plague years, leaving thousands of people to face food shortages and even starvation — nearly 7,000 people required emergency food aid during the last maudam event in 2008, the study authors wrote.