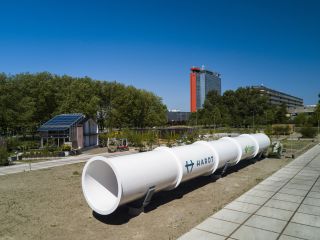 The nearly 100-foot-long (30 meters) track will be used to test all hyperloop systems in a vacuum at low speeds.
(Image: © Roderik van Nispen/Hardt Global Mobility)

European cities could become even more connected thanks to a superfast transportation system known as a "Hyperloop," which now has its first test facility on the continent.

Winners of a Hyperloop technology competition, held by Elon Musk's company SpaceX, unveiled Europe's first test facility for the rail transportation system this week. The nearly 100-foot-long (30 meters) track will be used to test all of the Hyperloop systems in a vacuum at low speeds, according to Hardt Global Mobility, the company set up to commercialize the technology developed by the competition team from the Delft University of Technology in the Netherlands. Hardt representatives said this facility is the first step in a four-year plan to build a Hyperloop system connecting two European cities.

A second, high-speed test line will be built by 2019, Reuters reported. And by 2021, a commercial Hyperloop could connect Amsterdam and Paris. [In Photos: Building the Superfast 'Hyperloop One' Transit System of the Future]

"We're going to test all systems that you need to test before you can actually start building a route between two cities, so: top speed, taking corners, switching lanes, making it as safe as possible," Tim Houter, co-founder of Hardt, told Reuters.

The Hyperloop system is made up of passenger-filled pods that are accelerated through a low-pressure tube to their destination. When Musk first unveiled his vision for the transportation system, he said the pods would travel at around 760 mph (1,220 km/h). This could cut the travel time between Los Angeles and San Francisco to only 30 minutes.

Several companies are working to bring the transportation concept to fruition. For instance, a startup called Hyperloop One (which is not affiliated with Musk) is building a full-scale test track in the Nevada desert. This facility, known as DevLoop, may hold a public test run as soon as this summer, company representatives have said.