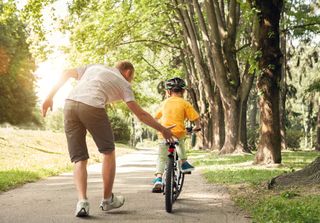 Researchers found that fathers with daughters use different language and show different levels of attentiveness to their daughters' needs, compared to fathers with sons. In addition, their brains' responses to their tots' pictures differed from those of dads with sons, according to the findings, which were published May 22 in the journal Behavioral Neuroscience.

The findings indicate that gender-based differences in fathers' behaviors appear to show up while children are very young, said lead study author Jennifer Mascaro, an assistant professor of family and preventive medicine at Emory University School of Medicine in Atlanta. The fathers in the study had kids between ages 1 and 3.

Previous research has shown that when parents complete questionnaires, they rarely report treating their sons and daughters differently. And psychology studies that observe how a parent and child interact in a laboratory setting may not always be representative of typical caregiving behavior. [8 Tried-and-True Tips for Talking to Preschoolers]

To observe real-world interactions between fathers and toddlers, the researchers recruited 52 men ages 21 to 55 who lived in Atlanta and had a 1- or 2-year-old son or daughter. Thirty of the dads had young daughters, and the rest had sons.

Each father was given a recording device that he wore on his belt during one typical weekday and one typical day over the weekend. The device was programmed to record 50-second snippets of sound every 9 minutes, but neither the father nor the child could tell when the device was actually recording.

"People behave incredibly natural" when wearing the recording device, since they never know when it's on or off, Mascaro said.

The researchers ended up with a total of 2 hours of sound from each father. They transcribed the recordings, and evaluated the fathers' attentiveness, behaviors and language used while interacting with their sons or daughters.

The study found that the fathers with daughters sang more to their little girls than the fathers with sons sang to the boys. When talking to their children, fathers of toddler daughters used more language related to sadness, using words such as "cry," "sad," "tears" and "lonely," as well as more language referencing the body, such as "belly," "foot" and "tummy," compared with fathers who had toddler sons. [25 Scientific Tips for Raising Happy Kids]

In addition, dads used more analytic words, such as "more" and "better," with their daughters than dads with sons did. Such words can facilitate more complex language development, Mascaro said.

On the other hand, fathers with sons used more achievement-oriented words — such as "win," "proud" and "top" — and they engaged in more rough-and-tumble play, such as tickling or tossing around their sons, the findings revealed.

When it came to being attentive, the fathers with daughters were more responsive to their children's needs than fathers with sons, according to the findings.

It was surprising that the fathers responded more to a neutral expression on their sons, Mascaro said. Fathers may be more attentive to their sons' neutral expressions because it is less clear what the son is feeling, and so they may need to read between the lines more to understand it, Mascaro told Live Science. [9 Weird Ways Kids Can Get Hurt]

One possible explanation for why fathers had different emotional and behavioral responses to their young children is biologically based, meaning that men could be hardwired to respond differently to sons and daughters, Mascaro said.

But another possibility is that there are societal, cultural and gender norms about how dads should interact with girls and boys, she said. The study looked at fathers from just one area.

It could also be that the differences in behavior stem from both biological and cultural explanations. In other words, there could be small differences in the way young boys and girls actually behave, which then cause fathers to encourage more of this behavior in their children, thus enhancing these behaviors in kids, Mascaro suggested.

The researchers said they could not tie the findings to any long-term outcomes in children, such as youngsters' social, emotional or intellectual development. However, the fact that these differences in fathers' behavior toward their sons and daughters show up so early is important in helping researchers understand how gender roles are developed and reinforced, Mascaro said.