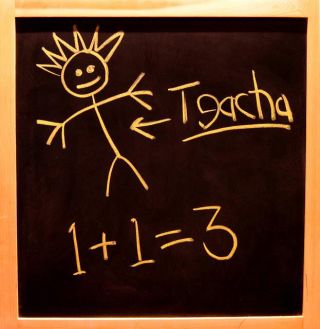 Photo taken by Dave Wicks. http://www.opticgroove.com The morguefile contains photographs freely contributed by many artists to be used in creative projects by visitors to the site.

Many explanations for the gender gap in math skills don't hold up, suggests new research on math skills and gender in 86 countries.

Math has traditionally been seen as a man's game, and the statistics often indicate that there are differences between males and females in their math skills, participation in math activities and performance on tests — called the gender gap in math. Some researchers have proposed this gap is natural — that men are just better at math than women — while others say it's a cultural difference, whereby society somehow keeps girls from pursuing or excelling in math.

The new research points to culture as the culprit, finding that certain countries showed less of a gap between males and females in math. Specifically, these female-math friendly countries have more gender equality, better teachers and fewer students living in poverty. In many countries, there isn't a gender gap in mathematics performance, the researchers said.

As for the United States, they say the gap has greatly narrowed in recent decades as more females are considered "highly gifted mathematicians" (3 to 1 now, instead of 13 to 1 in the 1970s) and more women are getting graduate degrees in math, though 70 percent are still men.

"This is not a matter of biology: None of our findings suggest that an innate biological difference between the sexes is the primary reason for a gender gap in math performance," study researcher Janet Mertz, of the University of Wisconsin-Madison, said in a statement. The study suggests that "the math-gender gap, where it occurs, is due to sociocultural factors that differ among countries, and that these factors can be changed."

Lawrence Summers, then president of Harvard, proposed in 2005 that men are overrepresented in math-based fields (like engineering and physics) because they have more natural variability in their math abilities.

This hypothesis suggests that there are more women who are "average" at math and more men who are really good or really bad at math, and these men who are high-ranking outliers would be the ones who end up in these math-based fields. [6 Gender Myths Busted]

The study analyzed data from two international surveys of school mathematics performance, one from 2007, which included fourth- and eighth-graders, and the other from 2009, which included 15-year-olds. The data from 86 countries, including the U.S., Belgium, England, Hong Kong and New Zealand, shows greater variability in male math talent only in some cultures, for example, Taiwan. In others, like Tunisia, girls showed more variability. This suggests that culture, not biology, drives women out of math fields.

It has been suggested that cultural influences on math skills may be nullified by single-sex education. Single-sex schooling systems are seen in some Muslim countries, so to see if this theory was true the researchers took a close look at the data from Middle Eastern countries.

"The girls living in some Middle Eastern countries, such as Bahrain and Oman, had, in fact, not scored very well, but their boys had scored even worse, a result found to be unrelated to either Muslim culture or schooling in single-gender classrooms," study researcher Jonathan Kane, of the University of Wisconsin-Whitewater, said in a statement.

This gender divide may be due to the type of schooling the boys get. Some of the schools are religious in nature, and contain few mathematics lessons. Many low-performing girls also drop out of school, so the datasets in these countries may be skewed, the researchers say.

The researchers found specifically that math achievement is highly related to gender equality. When the genders are more equal in income, education, health and politics, the math gender gap was smaller and students did better in math, the researchers found.

"We found that boys — as well as girls — tend to do better in math when raised in countries where females have better equality," Kane said. "It makes sense that when women are well-educated and earn a good income, the math scores of their children of both genders benefit."

Actions can be taken to improve the gender gap in math studies, the researchers say: Increasing the number of math-certified teachers in middle- and high schools, decreasing the number of children living in poverty and balancing the gender-equality gap could help improve female math skills, student assessment scores and participation in math-based careers.

The study was published in the January 2012 issue of the journal Notices of the American Mathematical Society.