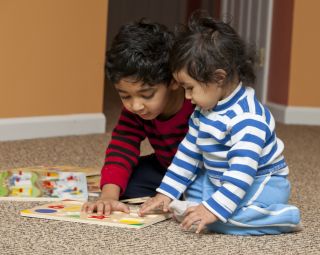 Studies show that men outscore women in tests of spatial abilities, including the sorts of mental rotation tasks needed to do puzzles. But a study published Aug. 29 in the journal Proceedings of the National Academy of Sciences suggests that patriarchal cultures could be the reason for some of the gender gap.
(Image: © Ami Parikh, Shutterstock)

At least one notable gender gap in abilities between men and women may be due in part to culture, a new study finds.

According to the research, women in cultures where men are in charge score lower than their male counterparts on a test that measures the ability to rotate objects in the mind's eye. But in communities where women are at the forefront, the gender gap disappears.

Many studies have found that women are generally worse at this task, called spatial ability, than men. Some, like former Harvard president Lawrence Summers, have suggested that such innate abilities might be the reason that women are underrepresented in science and math careers. Summers drew fire in 2005 for suggesting as much during a conference on work force diversification.

The Karbi and the Khasi

The gender gap in spatial abilities shows up across cultures, but little is known about how much of spatial abilities are really inborn and how much are shaped by culture. That nature-nurture schism is important in debates like the one Summers sparked, because if the difference is cultural, it suggests that discrimination and stereotypes might be to blame for the lack of women in high-level math and science positions.

One tribe, the Karbi, is patrilineal, meaning that men own most property and inheritance always goes to the oldest son. A second tribe, the Khasi, is matrilineal. The youngest daughter inherits the property in Khasi villages and men are forbidden to own land. [After Attack, Reclusive Amazon Tribe Feared Missing]

The advantage of going to rural India to study these two tribes is that they're biologically and geographically very similar, Hoffman said.

"We have this beautiful control group where they live literally right next door," Hoffman told LiveScience. "These villages are kind of interspersed with each other, and the tribes diverged genetically only a few hundred years ago."

Hoffman and an interpreter went to eight villages, some Khasi and some Karbi, and recruited 1,279 volunteers to complete a four-piece puzzle of a horse while being timed. All of the volunteers got a day's wages just for showing up; to motivate them, Hoffman offered another fifth of a day's wages if they completed the puzzle in less than 30 seconds.

"In some of these villages, almost the entire village came up," Hoffman said. "Most of these people work in the field all day long, which is pretty strenuous work, so if you were a mother you would come up with one baby strapped to your belly and one more grabbing on to your leg."

Across both tribes and genders, people took about 40 seconds, on average, to complete the puzzle. In the patrilineal Karbi tribe, men completed the puzzle 36 percent faster than women. But in the matrilineal Khasi tribe, women and men were equally good at their task.

What that shows, Hoffman said, is that "even while holding biology constant, there is an effect of culture on the gender differences in spatial abilities."

The experiment couldn't reveal exactly how culture influences spatial abilities, but education and family structure may play a role. In the patrilineal tribe, men receive about 3.5 years more education than women, while men and women in the matrilineal tribes are equally educated. Controlling for education shrank the gender gap by a third, Hoffman found, suggesting that more schooling could boost spatial ability.

Despite the patriarchal structure of the Karbi tribe, some women are in charge of land and money when there aren't any sons in the family. So Hoffman compared households where women had ownership with ones that men owned outright. Again, he found that when women's financial power at home goes up, the gender gap shrinks by a third. It's possible that women who are better at spatial reasoning get put in charge more often, Hoffman said, but it might also be that living in a less unequal household boosts spatial reasoning skills.

"Perhaps the way people are treated within a household — it doesn't even take an entire society — can have an impact on gender and spatial abilities," Hoffman said.

A 2009 review of research published in the journal Proceedings of the National Academy of Sciences similarly found that culture matters for math skills, with countries with low gender equality having larger gender gaps in math performance.

One factor that could play a role in women's lower spatial abilities score is stereotype threat, Hoffman said. Both in the Karbi tribe and in cultures around the world, there is a perception that women are less skilled at certain intellectual tasks, he said. When women (or any other group) are aware of such stereotypes, it can actually stress them out, causing them to perform worse on a given task, studies have shown.

Whatever the case, the new study provides hope that spatial ability gaps can be overcome, Hoffman said.

"If we go to say, the U.S., where policymakers presumably have little sway over our biological nature, they could nonetheless influence the way women are treated," he said. "This study gives us hope that in such cases, policy can have an influence and in fact, individual parents or teachers also have an influence."