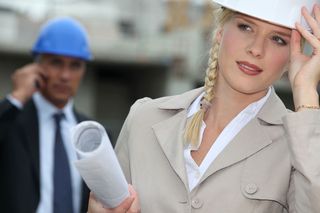 Compared with male participants, women who began college as engineering majors were less likely to remain in that field and less likely to believe they would go on to become professional engineers, the study found.
(Image: © auremar | shutterstock)

It may be a lack of confidence that is keeping more women from getting engineering degrees, a new study suggests.

Researchers from Stanford University found that women engineering students are not as likely as men to stay with that major because they are not secure in their ability to become professional engineers.

The researchers looked at 288 male and female students who entered engineering programs in 2003 at four colleges: the University of Massachusetts, Massachusetts Institute of Technology, Smith College and the Franklin W. Olin College of Engineering. The researchers were from the Clayman Institute for Gender Research at Stanford, a university that has a prominent engineering program of its own.

Despite the fact that math plays a big role in engineering fields and the stereotype that women are bad at math, the researchers found that both male and female subjects' self-assessments of math skills had no effect on whether they believed they would become professional engineers. [Girls Get Math: It's Culture That's Skewed]

The researchers also found no evidence that the female participants' desire to have families led them to leave engineering majors or affected their intent to become professional engineers.

This particular finding was different for men. The male students who most desired to have a family tended to believe least that they would become professional engineers.

"What we think is going on is that men who have strong traditional family plans may have some expectation of being the breadwinner for their family and, therefore, they seek jobs outside of engineering that are actually better paid," Cech said. "So they go onto law school or into finance or something like that."

Since women's reasons for not pursuing engineering were driven by confidence issues rather than monetary ones, the researchers advised that professors create an environment where doubts regarding confidence can be openly discussed.

"It would be good for them to talk about their confidence in their expertise and their confidence that engineering is the right fit for them," Cech added. "If these things can be brought to the forefront and explicitly talked about, it may help women and men engineering students develop confidence of their own."

The findings were published in the October issue of the American Sociological Review. The study is part of a larger project called "Future Paths: Developing Diverse Leadership for Engineering," which is funded by the National Science Foundation.