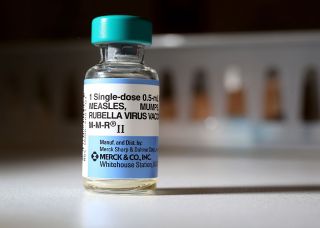 Misinformation about links between vaccinations and autism led to fewer immunizations in Somali-Americans in Minnesota.
(Image: © Joe Raedle/Getty Images)

A recent measles outbreak that has thus far sickened dozens of Somali-Americans in Minnesota — nearly all of them children — can be traced to anti-vaccination campaigns that targeted Somali-Americans and suggested that vaccines are linked to autism, health officials said.

On Friday (May 12), the Minnesota Department of Health (MDH) announced that it had confirmed 54 measles cases, 51 of which were in children age 17 or younger — and the majority of those infected were unvaccinated, according to an MDH report published online.

These figures are particularly high when compared to the number of measles cases reported in the state of Minnesota in previous years: a total of 56 cases reported between 1997 and 2016, according to MDH. [5 Dangerous Vaccine Myths]

Measles is highly contagious; if one person is sick, an estimated 90 percent of unvaccinated people who are physically near that individual will also get sick, the Centers for Disease Control and Prevention (CDC) explains on its website. And while the current outbreak is spreading in a matter of days, its origins can be traced back nearly a decade — to 2008, to be exact, Kristen Ehresmann, director of Infectious Disease Epidemiology, Prevention and Control at MDH, told Live Science.

In 2008, local news agencies reported that Somali-American children were accessing special education services in Minnesota school districts more than children in other ethnic demographics. That caught the attention of anti-vaccine groups, who erroneously link immunization to autism (a group of developmental brain disorders), Ehresmann said.

"They have been very aggressive in taking advantage of concerns about autism in this community," Ehresmann said. "Before 2008, Somali immunization rates [in Minnesota] were at or above the rate in the rest of [the] state. Starting in 2008, we saw a dramatic decline — now we're at 41 percent."

In 2016, measles was declared to be eliminated from the Americas, in an announcement by the Pan American Health Organization (PAHO). However, this meant only that cases no longer originated in the Americas; measles could still appear in the U.S. if they were imported, infectious disease specialist Dr. Amesh Adalja, a senior associate at the Johns Hopkins University Center for Health Security, told Live Science in September 2016.

Measles outbreaks are also a growing source of unease in Europe, particularly in areas where immunization coverage is low. More than 500 cases emerged in the World Health Organization's (WHO) European region in January 2017, and the disease continues to spread, WHO representatives announced in a statement published online March 28.

"With steady progress towards elimination over the past two years, it is of particular concern that measles cases are climbing in Europe," Dr. Zsuzsanna Jakab, WHO regional director for Europe, said in the statement.

"Today's travel patterns put no person or country beyond the reach of the measles virus. Outbreaks will continue in Europe, as elsewhere, until every country reaches the level of immunization needed to fully protect their populations," Jakab said.

As health officials in Minnesota race to contain the outbreak, they continue to work closely with Somali-Americans to address concerns about autism and to improve access to resources for children who have developmental needs. Officials are also collaborating with a health advisory group, made up of leaders in the Somali-American health care community, to further promote awareness of the importance of vaccinations — particularly in children, Ehresmann told Live Science.

In fact, it appears that the outbreak has spurred a backlash among Somali-Americans against the anti-vaccine groups, Ehresmann said.

"The community is really starting to push back and say, 'We don't want this,'" she said. "Physicians and other health care leaders in the community are speaking out, which makes a big difference. We're really seeing the community step up and take action."