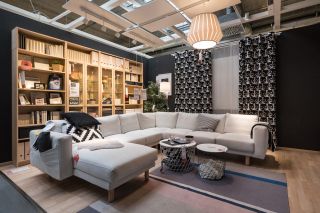 The next generation of artificial intelligence may be sitting right beneath you, at least if furniture maker Ikea has any say in the matter.

The Swedish furniture company's "future-living" research lab in Copenhagen, Denmark, called Space10, is conducting a survey to understand what people want when it comes to "smart" furniture.

Artificial intelligence (AI) is creeping into more aspects of people's daily lives. Self-driving cars are just around the corner, AI is being used to diagnose more and more diseases, and smart algorithms can now play and beat the best players of strategy games like Go, chess and poker.

As smart home technologies have become more ubiquitous, products ranging from smart electrical outlets to smart smoke alarms are flooding the market. So, it's not surprising that Ikea would be moving in the same direction. Exactly why people would want their Klippan sofa or Malm bed frame to speak to them, track their daily movements or offer assistance is not yet clear. [11 Odd & Intriguing Smart Home Technologies]

Though the new Ikea survey doesn't directly address that question, it does provide a hint of what people would feel comfortable with. Most respondents wanted a more human-like form of virtual assistant, as opposed to one that is more robotic. So far, Ikea survey respondents were divided on the ideal gender of their robotic assistants: about equal amounts of people prefer either a Sven or a Sigrid, though the most popular option was a gender-neutral form of AI. And just as with human acquaintances, most wanted AI pals that were like them, affirming their own worldview.

Most respondents wanted an AI that was reasonably intelligent — that could anticipate what that person wanted before he or she asked, that could prevent someone from making mistakes and that would constantly collect data to improve the experience.

Most participants weren't seeking transcendence from their end tables: Few wanted a religious form of AI. (What religion would an AI subscribe to — would it have a silicon god?) The survey didn't get into the nitty-gritty to reveal what tasks a sofa could realistically assist a person with.

This is not the first time that Ikea has ventured into the realm of more futuristic technologies. In addition to wireless charging tables and chainless bikes that never rust, the furniture giant has also envisioned smart kitchens that automatically detect foods and cook the optimal meals from it, automatically replenishing missing supplies by drone.

To weigh in on how intelligent you want your next Billy bookshelf to be, you can take Ikea's survey online.