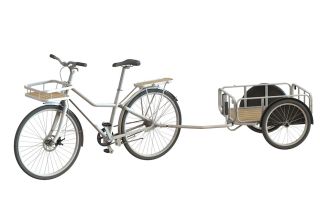 The new Ikea bike relies on a rust-free belt instead of a chain.
(Image: © Ikea)

Dealing with a rusty bicycle chain can be a messy affair, but an innovative new bike from Ikea solves that pesky problem. The furniture retail giant recently introduced its new "Sladda" bike, which uses an oil-free and corrosion-resistant drive belt rather than a metal chain.

The drive belt is designed to last about 9,320 miles (15,000 kilometers), which is about two to three times longer than a typical steel chain, according to Ikea. Moreover, the unisex Sladda bike has a "click system" that lets the rider snap on accessories, such as a basket, a bike bag rack and a towing trailer, the company said.

"Sladda is like tablet apps: You can add endless accessories to enhance ease of use," Oskar Juhlin, director of industrial design at Veryday, a company that partnered with Ikea to make the bicycle, said in a statement. [Hyperloops, Jetpacks & More: 9 Futuristic Transit Ideas]

The new drive belt may be a boon to riders who take to their bikes even during inclement weather. Over time, steel bike chains tend to rust, particularly when they're covered with corrosive salt that's left on the roadways, LiveStrong.com reported.

Accumulated rust can be difficult to remove, and it can also affect the chain's flexibility, LiveStrong.com said. But Ikea's new bike won't have those problems, the retailer said.

Moreover, the bike has automatic gears that are hidden in a sealed hub placed in the rear wheel, the website Core77 reported.

This year, the new urban bike won one of three Red Dot Awards, an internationally sought-after prize awarded by Design Zentrum Nordrhein Westfalen in Essen, Germany. The bike also won the Red Dot "Best of the Best 2016" award, meaning it got the top prize in each category, Ikea reported.

"The team wanted the [bicycle] frame to be gender- and activity-neutral, yet able to transform between semi-active and relaxed riding styles," according to the Red Dot website.

Sladda's frame is made from aluminum, meaning it will be easy to lift and carry up and down stairs, Core77 said. The bike, which comes with either 26- or 28-inch (66 to 71 centimeters) wheels, also has two layers of lacquer that will protect the frame from mud, salt and scratches, Core77 reported. But it's not for little kids — Ikea recommends that only people age 12 or older use it.

The bike is expected to be available beginning in August for $797, although Ikea's loyalty members will be able to buy it for $569 for a limited time, Core77 said.

But the Sladda isn't the only chainless bicycle out there. Gates Carbon Drive also makes a belt drive, but out of carbon fiber, according to its site.

No matter the company, though, bikes are a good way to help people get active.

"Sladda is a great alternative to the car," Juhlin said. "It contributes to a more sustainable lifestyle and a better environment."