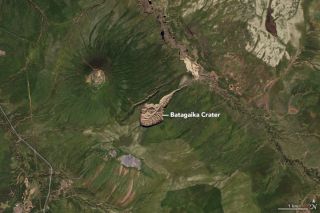 A dramatic, growing scar in the landscape of Siberia is a paleontologist's dream.

Batagaika crater, seen growing in a series of satellite images taken between 1999 and 2016, is a "megaslump," a feature caused by the collapse of melting permafrost. It sits in Russia's Sakha Republic, in the east Siberian taiga (a northern forest) and has been growing steadily since the 1980s. As the ground slumps, it has revealed long-buried fossils of vegetation, cave lions, woolly rhinoceroses, mammoths and other Pleistocene life. [Earth from Above: 101 Stunning Images from Orbit]

A series of four images taken by instruments aboard the Landsat 7 and Landsat 8 satellites show the crater growing over the years. In 2015, scientists presented research at the third conference of Palaeo-Arctic Spatial and Temporal Gateways tracing the development of Batagaika and found the first signs of a depression in the land in the early 1970s. The ground began to open up in the late 1980s. By Aug. 27, 1999, the slump was a minor gash in the green tundra, as Landsat 7 showed. Over time, the crater has widened, lengthened and deepened into a tadpole shape about 0.6 miles (1 kilometer) long.

This process is driven by warming temperatures that thaw the permafrost, which is soil that was previously locked in ice year-round. As permafrost thaws, it can create dramatic changes in the landscape called thermokarsts. Batagaika is a particularly large thermokarst, but many smaller craters pockmark the tundra.

A thermokarst like Batagaika is particularly useful to paleontologists and climate scientists, because it contains tens of thousands of years of frozen remains. A 2016 study published in the journal Climate of the Past found sediments exposed in Batagaika dating back to the Middle Pleistocene, which ended 126,000 years ago. The remains of large fauna like horses and bison reveal the animals that roamed the region in the Pleistocene. Scientists reported in 2015 in the journal Scientific Reports that they had analyzed the fat of several ancient bison, including one from Batagaika, and found that human hunters would have been well-nourished by essential fatty acids held in the meat.

Preserved bits of vegetation and pollen can also offer a window into the past habitat and climate. Studies of Batagaika sediments show a warmer, forested history for this area of Siberia, according to NASA's Earth Observatory.

Editor's Note: This story was updated to correct when the Middle Pleistocene ended. It was 126,000 years ago, not 126 million years ago.