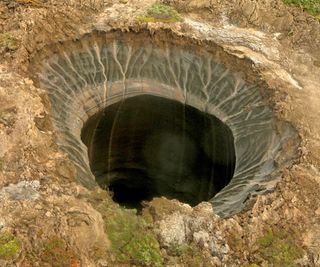 A crater on the Yamal Peninsula in Siberia. Scientists aren't sure what caused these craters to form in the Siberian Arctic, where the permafrost is thawing.
(Image: © Itar-Tass/Zuma)

Is the Siberian permafrost exploding? Recent reports out of the Arctic Circle suggest that methane pockets are erupting and causing huge craters, but scientists aren't so sure that these features are necessarily the result of detonations — or that they are even new.

A Siberian Times article suggested that 7,000 underground gas bubbles are set to "explode" on the peninsulas of Yamal and Gydan as a result of melting permafrost. The article differentiates these small gas bubbles from enormous craters in the tundra landscape, but asserts that the huge craters are the result of subsurface methane gas exploding as global warming heats up Earth. That is far from certain, scientists told Live Science. In fact, the craters may be thousands of years old.

"These craters are recently discovered by scientists," said Katey Walter Anthony, a biogeochemist at the University of Alaska, Fairbanks, who studies methane release from permafrost. "It doesn't mean they are new." [See Photos of Siberia's Mysterious Craters]

First, the facts: The permafrost of the Siberian tundra is definitely thawing. Permafrost is soil that stays frozen year-round; it locks up organic materials like dead plants (or the corpses of mammoths) and keeps them from rotting. When the permafrost thaws, all that organic material starts to decompose, like food left too long in a broken refrigerator. The decomposition releases carbon dioxide, methane and nitrous oxide, all potent greenhouse gases. Climate scientists agree that the permafrost melt will amplify the effects of greenhouse gases released by human activities, which could worsen the amount of warming the planet experiences.

This methane from decomposition of ancient organic material shouldn't be confused with methane hydrates, which are ice lattices that have methane trapped inside. Melting methane hydrates are another concern for the climate because their thaw could also release more of that greenhouse gas into the atmosphere.

The most pervasive route for permafrost thaw in Siberia is what's called active-layer deepening, said Ben Abbott, a postdoctoral researcher at Michigan State University. Every summer, the top layer of permafrost that thaws gets deeper and deeper.

Vasily Bogoyavlensky, a researcher at Moscow's Oil and Gas Research Institute, told the Siberian Times that giant craters observed in Siberia over the past few years could be thermokarsts created when decomposition gases, such as methane, put pressure on the overlying earth, causing dirt-covered ice hills called pingos to explode. But even if the craters are caused by melting permafrost, that mechanism of formation is just speculation, Abbott said.

"Nobody has seen one [form], so we don't know it if is an explosion or just a collapse," Abbott said.

Nor are the craters necessarily human-caused. After all, permafrost has been melting since the end of the last ice age more than 10,000 years ago.

"I am thinking that people need to be a little more careful about claiming that we have methane explosions," Walter Anthony said.

Meanwhile, researchers with the Russian Academy of Sciences said they have found thousands of small underground gas pockets with high levels of methane and carbon dioxide dotting the landscape and are assessing these spots for stability, the Siberian Times reported. Another recent article claims that more than 200 Arctic lakes are "bubbling like Jacuzzis" with methane gas.

It's not time to panic, though. The aerial images used to find the bubbling lakes reveal little about what's actually bubbling up, Walter Anthony said: The seeps could be methane, or other gases, or just groundwater. Without fieldwork, she said, any attempt to identify the bubbles is just guesswork.

Of course, thousands of gas pockets in the tundra could be alarming, Abbott said, but given the size and inaccessibility of the Siberian Arctic, researchers have little knowledge of what a normal number of these features might be.

"I certainly don't want to give the impression that we should dismiss these features or not think they are potentially dangerous in terms of the climate system and in terms of local ecosystems, but I also don't think it's the beginning of the end," Abbott said.

Though permafrost melting could be a scary contributor to climate change, Abbott and his colleagues surveyed permafrost researchers last year for a paper published in the journal Environmental Research Letters; they found that most believed the tundra has not yet hit the "point of no return" at which runaway melt is inevitable.

Permafrost is sensitive to temperature, Abbott said, but it also has a huge amount of momentum: There are places where deep permafrost is actually getting colder because it is only now "feeling" the chill of the last ice age through the intervening layers of soil. If humans were to control greenhouse gas emissions so that they begin to decline by the middle of the century, most of the carbon in the permafrost will stay frozen.

"The key is really limiting human emissions as quickly as possible, because in 30 or 40 or 50 years from now, if we have gone past that point, there will be nothing we can do about it," Abbott said. "The flip side of a system with a lot of momentum is that once it starts moving, there is little you can do to slow it down."