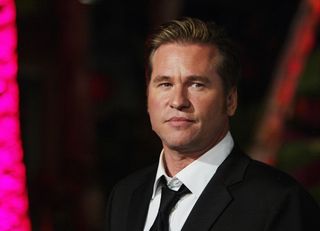 Actor Val Kilmer recently revealed that he had cancer that left him with a "swollen" tongue, but exactly what type of cancer could have caused this symptom?

On Wednesday, April 26, Kilmer took part in a Reddit AMA ("ask me anything"), and a user asked Kilmer about an incident last year in which actor Michael Douglas suggested Kilmer had oral cancer.

Kilmer replied that he did have "a healing of cancer, but my tongue is still swollen [although] healing all the time."

This is the first time Kilmer has acknowledged that he'd had cancer, although people have speculated about his health. In 2015, the actor was spotted wearing a tracheostomy tube, which is a tube placed through a surgically made hole in the windpipe that can help people breathe when they have conditions that could block the upper airways, according to the National Institutes of Health. In October 2016, Douglas suggested Kilmer had oral cancer, although at the time, Kilmer denied having the illness. It is still uncertain exactly which type of cancer Kilmer had because the actor has not publically revealed the type.

Dr. Dennis Kraus, vice chairman of the Otolaryngology – Head & Neck Surgery department at Lenox Hill Hospital in New York City, said that the use of a tracheostomy tube "could potentially be consistent with" having cancer of the mouth, tongue, base of the tongue or larynx. Kraus has not treated Kilmer, and noted he did not have knowledge of Kilmer's diagnosis or care, other than from reports in the media. [10 Celebrities with Chronic Illnesses]

As for swelling of the tongue, this symptom could be caused by a tumor itself or by radiation or surgery treatment for the tumor, Kraus said. Cancers of the oral cavity and larynx are typically linked with using tobacco, and cancers of the mouth are often linked with drinking alcohol, Kraus said. Cancer of the oropharynx, which is the section of the throat that includes the base of the tongue and the tonsils, is often linked with human papillomavirus (HPV) infection, Kraus told Live Science.

In recent years, rates of cancers of both the oral cavity and the larynx have fallen as a result of declines in smoking, but cases of oropharynx cancer tied to HPV infections have increased, Kraus said.

Outcomes for head and neck cancers vary by case, but even patients with advanced tumors that haven't spread to other areas of the body have "significant potential for being cured" of their cancers, Kraus said.