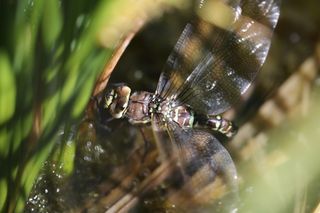 Female dragonflies say no to sex by faking their deaths, new research has found.

Once a female dragonfly has mated, all she is interested in doing is laying eggs and getting on with her life. So, when stalked by an unwelcome lover (or two), she crashes to the ground and plays dead. When the duped males eventually leave, the female flies off, according to the research, published online April 24 in the journal Ecology.

In summer 2015, Rassim Khelifa, a Ph.D. student in the Department of Evolutionary Biology and Environmental Studies at the University of Zurich, was out in the Swiss Alps, collecting eggs of the moorland hawker dragonfly (Aeshna juncea). His aim was to study the effects of climate change on dragonflies by exposing larvae hatched from these eggs to varying temperatures back in his lab. All that time spent by the pools watching female dragonflies and scouting out eggs led him to discover their death-feigning behavior. [Animal Sex: 7 Tales of Naughty Acts in the Wild]

"It was a byproduct of my research," Khelifa told Live Science.

He found that the first strategy that females use to go unnoticed is to choose an egg-laying site that is concealed by plants. Even so, the females can be harassed by males on their way to and from the site. That's when they use the other strategy of faking their own death, he said.

Out of a total of 35 female dragonflies that Khelifa observed, 27 females crashed to the ground or into shrubs, feigning their death, and of those, 21 succeeded in tricking the males. About 71 percent of those that crashed preferred dense vegetation cover to open ground for staging their death.

Hovering males rely on movement and color to detect females, so they were unable to spot the ones lying frozen on the ground or hidden away in the grass. All of the females that kept on flying instead were grabbed by the males midflight, Khelifa found.

The death-feigning females were fully aware of their surroundings; when Khelifa tried to catch them, 87 percent of the females got away.

Feigning death as a strategy for evading predators is seen in many animals, including dragonflies. Khelifa thinks that the moorland hawker females use the same approach to avoid sexual conflict with males. Mating with one male can fertilize all of the eggs of a female dragonfly and any subsequent mating with males that tend to be aggressive can harm the female, he said.

"When a male copulates with a female, it first extracts the sperm of the previous male," Khelifa said. "This can damage the reproductive tract of the female. So, multiple mating is not advantageous for the female."