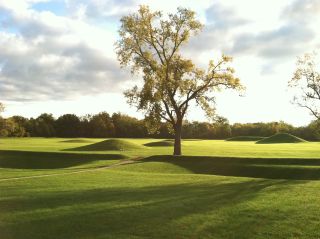 The Hopewell people built ceremonial mounds for about 500 years. Their purpose is a matter for debate.
(Image: © NPS)

The people who are considered to be part of the "Hopewell culture" built massive earthworks and numerous mounds while crafting fine works of art whose meaning often eludes modern archaeologists.

This "Hopewell culture" flourished between roughly A.D. 1 and A.D. 500. The name Hopewell "is not the name of any Native American tribe or ethnic group. It is an archaeological culture defined on the basis of similarities in artifacts and architecture," wrote Brad Lepper, curator of archaeology for the Ohio History Connection, in the book "Ohio Archaeology" (Orange Frazer Press, 2005).

Many Hopewell sites are located in what is now southern Ohio. "Similar artifacts and mounds and enclosures, seemingly related to the Hopewell culture, are found from southern Ontario to Florida and from Missouri to the western flanks of the Appalachian Mountains," wrote Lepper.

The name "Hopewell" comes from "Mordecai Hopewell, a Confederate veteran of the Civil War," wrote Lepper, noting that Hopewell "owned the farm in Ross County that included a spectacular group of mounds and earthworks that became the type site for the Hopewell culture."

The people of the Hopewell culture did not use a writing system and it is not known if they called themselves by a common name or by many different names.

The people of the Hopewell culture built immense structures, often out of earth, whose purpose remains a source of debate among archaeologists.

Between A.D. 1 and A.D. 500, the people of the Hopewell culture "built a large and elaborate complex of earthen mounds, walls, ditches, and ponds in the southern flowing drainages of the Ohio River valley," wrote Mark Lynott, the former manager and supervisory archaeologist at the Midwest Archaeological Center, in his book "Hopewell Ceremonial Landscapes of Ohio" (Oxbow Books, 2014).

"The building of all these great ceremonial landscapes was accomplished over four or more centuries, and reflects an amazing level of social stability and societal commitment to monumental and ceremonial construction," wrote Lynott, who passed away in 2014.

The structures, some of which are now destroyed or partly destroyed, were immense. Some of the best-preserved Hopewell structures are located in Hopewell Culture National Historic Park. One example of preserved earthworks in the park is shaped like "a parallelogram 1,800 feet (549 meters) long on the east and the west sides and 2,800 feet (853 meters) long on the north and south," notes the National Park Service (NPS) on their website. Within this large earthwork there is an array of mounds and smaller earthworks. They form a complex landscape that is hard to describe in writing.

This large earthwork is just one of hundreds of large structures that the people of the Hopewell culture built. Many of these structures have yet to be studied in detail. "Considering the large number of sites that were built between A.D. 1 and A.D. 450 in southern Ohio, only a very small number of these sites have received more than cursory attention from the archaeological community," wrote Lynott.

In a paper published in the Ohio Archaeology book, consulting archaeologist Frank Cowan of F. Cowan & Associates reported on how his team discovered and studied a circular structure that was made out of wooden poles, which his team called "Woodhenge." This structure had "172 large postholes that formed a nearly perfect circle 80 yards in diameter," wrote Cowan. Each posthole was "large enough to hold posts the size of small telephone poles." The team found the structure was built around 1,800 years ago, and there were a series of houses nearby that were only occupied for brief periods of time, as if people only stayed at "Woodhenge" long enough to attend a specific event. What happened at this event is uncertain.

The purpose of the immense structures that the people of the Hopewell culture built is not entirely clear. "The large earthen enclosures and their associated landscapes appear to have been multi-functional places where people perhaps met for games, ceremonies, rituals, trade, or to share news," wrote Lynott. Some of these structures may have had astronomical significance. A series of earthworks and mounds in Newark, Ohio, has alignments with the moon and Solstice sun, wrote Ray Hively and Robert Horn, professors at Earlham College in Richmond, Indiana, in a paper published in 2014 in the Midcontinental Journal of Archaeology.

Many questions remain to be answered about what the people who built these immense structures were like. Lynott wrote that archaeologists are not certain where all these people lived or whether they were farmers or whether they hunted and foraged for food. "Understanding how and where the people who built the Ohio Hopewell ceremonial landscapes lived has yet to be fully resolved," he wrote. Archaeologists have tended to concentrate their excavations on the immense structures but have paid less attention to the settlements where the people lived.

From the artifacts found near the Hopewell structures and burials in Ohio, it appears that people of the Hopewell culture were able to import material from distant locations in North America. This included "obsidian and grizzly bear teeth from the Rocky Mountains, copper from the northern Great Lakes, mica and quartz crystals from the Appalachian mountains and a range of shark teeth, barracuda jaws and conch shells from the coast of Florida," wrote Lynott.

The Hopewell people were even able to acquire iron that had been hammered out of a meteor located in Minnesota, reported a team of researchers in an article published recently in the Journal of Archaeological Science. This "meteoritic metal represents the most exotic raw material used during the Middle Woodland period [the time period the Hopewell flourished] in Eastern North America," the research team wrote in their paper.

However, the people of the Hopewell culture do not appear to have been politically united but instead consisted of a large number of small groups that were autonomous. "While these small-scale societies may have been linked by common ideologies or belief systems, their local autonomy is clearly visible in the great diversity seen in landscape construction and the features associated with the large enclosures," wrote Lynott.

The artwork the Hopewell people left behind offers a glimpse into their beliefs. "Much of this art presented iconic images of elegant simplicity and stunning power, such as the mica or copper cut-outs of open human hands or bird talons," wrote Lepper. "Such symbols must have been as richly evocative for the participants in this Hopewell culture as the Christian cross, the Islamic crescent, or the Jewish star are to modern believers…"

The artwork the Hopewell people left, which can be seen today in many museums, included carvings on tobacco pipes. Many of these tobacco pipe carvings show birds, otters and frogs. Indeed, animals played an important role in the lives and beliefs of the Hopewell people. In 2015 researchers announced that they had found evidence that a bobcat was kept as a pet and was buried underneath a burial mound while wearing a collar.

The Hopewell culture flourished until around 1,500 years ago when suddenly things changes. "In a short span of time, people ceased building monumental ceremonial centers, they drastically reduced their production of art, they acquired far fewer exotic materials and their interaction spheres contracted to small territories surrounding villages that often were themselves surrounded by stockade walls," wrote Lepper in his book. He noted that these stockade walls appear to have been built to defend against attacks, an indication that the amount of conflict increased. Archaeologists do not know why conflicts increased or why the other changes marking the end of the Hopewell culture occurred.

Today the state of Ohio is supporting a bid to have some of the massive earthworks constructed by the Hopewell culture declared a UNESCO World Heritage Site.