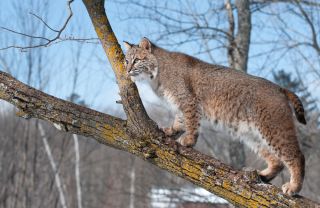 The ancient bobcat was wearing a special collar and was found in a ritual burial mound normally reserved for humans.

"It really looked like it had been buried not because it was a feral accessory for a human, but because it was, in some way, kind of respected on its own," said study co-author Angela Perri, a zooarchaeologist at the Max Planck Institute for Evolutionary Anthropology in Germany. [In Photos: Urban Bobcats Stroll Through American Southwest]

The bobcat's grave was part of a burial complex made by people from the Hopewell culture, a group of ancient American people who lived across an area that now makes up several states, all the way from Ohio to Florida. While each region had slightly varying ways of life and may have spoken different languages, people from the Hopewell culture had distinctive forms of pottery and art, such as animal-shaped tobacco pipes and shiny, micalike material carved into animal shapes, Perri said. People in the Hopewell culture also lived in villages with separate ritual burial mounds, such as the gigantic graveyard outside of Cahokia, near St. Louis, she added.

Perri found the ancient bobcat while doing her Ph.D. research on ancient dog burials. While going through collections from the Illinois State Museum, she found the skeleton of what was marked as a dog wearing a collar of bear teeth, shells and other items.

The initial discovery wasn't completely surprising; dogs were domesticated by the Hopewell culture, and archaeologists often found dogs buried at their settlements. However, dogs were typically buried in the village perimeters, not within the burial mounds themselves, she added.

When Perri took a closer look at the skeleton, she found a surprise: sharp, shearing teeth.

"The way that cats and dogs eat meat is quite different," Perri told Live Science. "Cats kind of tear and shred at the meat. And as soon as I saw the teeth, I knew immediately it was a cat of some kind."

To identify the specific cat, she and her colleagues pored over a catalog of local animal skeletons housed at the museum. They soon found a modern bobcat specimen that, just like the ancient cat, had a mix of baby and adult teeth. The modern bobcat was about 5 to 7 months old, which suggested the ancient cat was also around that age.

"That age is a really critical age," Perri said.

At 5 months, bobcats are weaned, and they may chase small prey, such as lizards and birds, but their moms are still bringing them most of the meat they eat, Perri said. By the time they're 7 months old, most bobcats begin to go out on their own, she added.

It's still a mystery exactly why the ancient bobcat — which was about the size of a large, full-grown house cat — was buried with the care and effort typically afforded to humans.

But the simplest explanation is that ancient people had bonded with the animal. Bobcats, especially at a young age, are extremely cute and easy to tame, Perri said.

"It's quite possible they found the bobcat either orphaned, or they killed the mother and they took it home and attempted to raise it," Perri said.

They may not have provided it with the food it needed, and maybe that's how it died, Perri speculated. While the bobcat could have been a child's pet, adults must have initiated — or at least approved of — the burial, as the mound was big enough that a child couldn't have dug the grave on his or her own, Perri said.

The team was planning to analyze chemicals in the bones to learn more about what the ancient wild kitty ate and where it came from. But, because the governor of Illinois is planning to shut down the Illinois State Museum, where the remains are housed, the researchers may not get a chance to do any further analysis, Perri said.

The findings were published in the Midcontinental Journal of Archaeology.