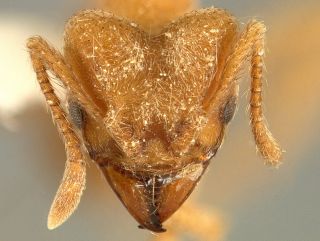 "No killing moths or putting boiling water on the ants," the band Radiohead intoned in its creepy, computerized 1997 track "Fitter Happier." A new species named after the band would probably appreciate the sentiment.

Sericomyrmex radioheadi is a newfound Central and South American ant named to honor Radiohead for the band's conservation and climate-change awareness efforts. But the famous name isn't all that makes this ant special: It also grows its own food and is covered with a filamentous layer of white crystals.

Ants in the Sericomyrmex genus cultivate colonies of fungus in their nests, and this fungus protects the insects from parasites and serves as a food source. These ants are found all across Central America and in much of South America, but differentiating among the species can be difficult, researchers Ana Ješovnik of the Smithsonian Institution and Ted Schultz of the University of Maryland, College Park, wrote in their study, published today (April 24) in the journal ZooKeys. [Amazing Photos of Ants from Around the World]

The ants are striking under a microscope, thanks to the covering of velvety hairs that has given the insects the nickname of "silky" ants, the researchers said. But the ants are tiny and difficult to spot in the wild, Ješovnik and Schultz wrote. In an attempt to untangle the complicated taxonomy of the silky ants and to search for new species, the two researchers and their colleague Jeffrey Sosa-Calvo collected around 19,000 ant specimens from 17 different countries.

Previously, scientists had identified 19 species of Sericomyrmex and three subspecies, but the new analysis revealed that there are, in fact, only 11 separate species of these silky ants.

Three of those species are new, including S. radioheadi. One of the other newfound species, S. maravalhas, was found in the interior of Brazil and was named after the ant researcher Jonas Maravalhas of the Federal University of Uberlândia in Brazil, who provided specimens used in the analysis. S. saramama, the third newfound species, hails from Peru, Colombia and Ecuador, and it was named after Saramama, the Incan goddess of grain.

S. radioheadi was discovered in the Amazonian region of Venezuela and got its name in part because the English band's music "is an excellent companion during long hours at the microscope while conducting taxonomic revisions of ants," the authors wrote. While all three of the newfound species look quite similar to the untrained eye, S. radioheadi is a lighter yellow than other silky ants; that coloration may have been a result of age, as all the species studied by the researchers were long-deceased ants from museum collections, the investigators said.

The researchers said they aren't sure why the newfound ant species all boast crystalline hairs, but added that the structures may have something to do with the ants' fungal gardens. Most fungus-cultivating ants grow beneficial bacteria on their bodies to repel parasites from their fungi, but Sericomyrmex ants don't do this, the scientists said. The researchers speculated that the crystalline hair layer could play some sort of anti-parasite role, instead.