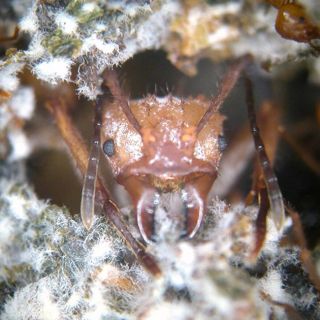 A worker leaf-cutter ant in a fungus garden. These gardens grow the crop that feeds the colony.
(Image: © Ainslie Little.)

Leaf-cutter ants, which use leaves to raise a fungal crop to support a colony of millions, seem to have discovered farming long before humans evolved. They may also have beaten us to natural pesticides by a comfortable margin.

Although it's not possible to assign a date to the ants' latter discovery, the results of a new study suggest that fungus-cultivating ants may have co-evolved with bacteria whose antibiotic compounds help them protect their crop. [Infographic: The Life of an Ant]

There are 230 species of fungus-farming ants, all of which cultivate fungus for food. However, their fungal crop is often attacked by a parasitic fungus, called Escovopsis. To prevent infections, the ants have adopted special defenses against the parasite, including fungus grooming, in which they run their mouthparts over their crops and lap up the parasite's spores, according to senior researcher Cameron Currie, an evolutionary biologist and microbiologist at the University of Wisconsin in Madison.

As a doctoral student, Currie discovered leaf-cutter ants carried bacteria around with them, visible as fuzzy white patches on their exoskeletons. Later, in 2005, he and colleagues identified the bacteria as Pseudonocardia, which is part of a group, Actinobacteria, that is a source of human antibiotics. There was evidence that the bacteria helped the ants maintain their fungus gardens, leading the researchers to believe that ants had beat humans to some of our major innovations, Currie said.

In research published Wednesday (Nov. 24) in the journal the Proceedings of the Royal Society B, Currie and his team found that of the roughly six types of Pseudonocardia bacteria, certain types are associated with certain species of ants and their agricultural systems. For instance, among ants that raise fungus on cut leaves, the vast majority of the symbiotic bacteria present belong to two closely related groups.

The researchers also tested how effective different Pseudonocardia strains were in suppressing fungal growth, particularly that of the ants' nemesis Escovopsis. Here, they found that the parasite was more susceptible to the antibiotics produced by Pseudonocardia than were other fungi. They also noticed that strains of Pseudonocardia found dwelling on ants were more effective against the parasite than free-living strains.

A long history together

Currie estimates that ants have been growing fungus gardens for up to 50 million years. Relatives of the parasitic fungus are known to attack other fungi, including relatives of the fungal crops. This suggests that when ants domesticated the fungus, they probably acquired the pathogen as well, he said.

It's hard to put a date on when the ants recruited the bacteria to help, but this study suggests the bacteria have been associated with this system for long periods as well, he said.

In fact, some fungus-growing ants house Pseudonocardia within cavities in their workers' exoskeletons, and may even feed them from specialized glands. On their nuptial flight, queens carry a pellet of the fungal crop in their mouths and the bacteria on their exoskeletons to their new colony. To have such a specialized partnership suggests a long period of evolution.

What's more, a piece of amber from the Dominican Republic offers a more-than-20-million-year-old clue: Bacteria are visible on an ant trapped within it. It's not clear; however, which type of bacteria is associated with the preserved ant, according to Currie.

Other organisms also seem to be involved in this ant-fungus-bacteria system. Another type of bacteria transforms nitrogen into a useable form, effectively fertilizing the cultivated fungi in leaf-cutter farms. Meanwhile, black yeast appear throughout the farms, and research has shown that, at least in one system, they eat the Pseudonocardia, making it more difficult for the ants to feed their crop. [See Live Leaf Cutters on the Ant-Cam]