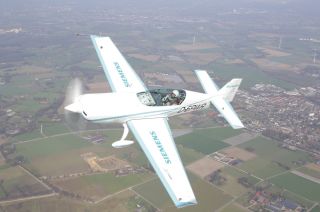 Electric engines have already demonstrated their power on the ground, in record-breaking cars such as the Tesla Model S. But now, they are taking to the skies, and one plane recently broke a speed record for electric-motor aircrafts.

On March 23, the electric-powered Extra 330LE plane reached a record-setting top speed of about 209.7 mph (337.5 km/h), according to Siemens, the German company behind the motor. The World Air Sports Federation (FAI) recognized the flight as the fastest for an electric airplane with a takeoff weight of less than 1,000 kilograms (2,205 lbs.). The flight surpassed the previous record, set in 2013, by 8.38 mph (13.48 km/h).

Then, the next day (March 24), the Extra 330LE set another record: It became the world's first electric aircraft to tow a glider. In a statement, Siemens representatives described the so-called aerotow as "nearly silent" and noted that the electric-powered plane carried the glider to a height of 600 meters (1,968.5 feet) in 76 seconds. [Up She Goes! 8 of the Wackiest Early Flying Machines]

"Just six such propulsion units would be sufficient to power a typical 19-seat hybrid-electric airplane," Frank Anton, head of "eAircraft" at the Siemens startup unit next47, said in a statement.

The motor was already a world-record holder for its power-to-weight ratio. At only about 110 lbs. (50 kilograms), the lightweight electric motor supplies a constant output of 260 kilowatts, making it five times more powerful than similar systems, according to Siemens.

Siemens partnered with Airbus last year to develop electrically powered and hybrid-electric planes. The Extra 330LE serves as a foundation to show the power of electric motors and to scale up the technology for use in regional airliners, according to Siemens.

Other flights powered by alternative energy sources have also set records recently, such as last year's historic completion of a solar plane's flight around the world.