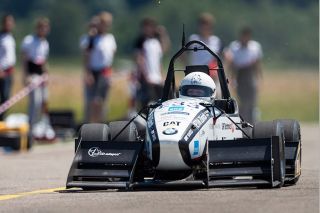 In a record-setting feat, an electric car zoomed from 0 to 62 mph (100 km/h) in just 1.513 seconds last week, making it the fastest known electric car in the world.

The "Grimsel" electric car took less than 98 feet (30 meters) to reach 62 mph, according to ETH Zurich, a science, technology, engineering and mathematics university in Zurich, Switzerland.

The previous world record — 0 to 62 mph in 1.779 seconds — was set in 2015 by a team at the University of Stuttgart in Germany. That makes both electric cars faster than the Ariel Atom (which can go from 0 to 60 mph in 2.5 seconds), the No. 1 rated car on a list put together by the BBC's Top Gearof "fastest accelerating cars on sale today." [Hyperloop, Jetpacks & More: 9 Futuristic Transit Ideas]

The new record was set at the Dübendorf Air Base near Zurich on June 22. The award-winning team of 30 students, from ETH Zurich and Switzerland's Lucerne University of Applied Sciences and Arts, built the car in less than a year.

The Grimsel is the fifth electric vehicle at the Academic Motorsports Club Zurich (AMZ), a club created by students at ETH Zurich in 2006, and sets new standards in lightweight construction and electric drive technology, ETH Zurich representatives said in a statement.

The car is made out of carbon-fiber materials and weighs just 370 lbs. (168 kilograms), or about as much as a small upright piano. It has four-wheel drive, and each of its wheel-hub motors is capable of generating 200 horsepower and 1,254 foot-pounds (1,700 newton meters), the researchers said. A foot-pound is how much energy it takes to raise 1 lb. a distance of 1 foot.

The Grimsel's traction-control system regulates each wheel's performance individually, which allows the car to accelerate even faster, according to ETH Zurich.

"No large-scale production car — even one with a combustion engine — can reach an acceleration comparable to [what] the Grimsel [achieved]," ETH Zurich representatives said in the statement.

In fact, the Grimsel also did well at the 2014 international Formula Student competition, the largest competition in the world for engineering students. A total of 500 teams competed in that event, and the Grimsel scored an average of 920 points out of a possible 1,000 on three different trials, making it AMZ's most successful vehicle to date, ETH Zurich representatives said.

The Grimsel even helped AMZ maintain first place at the Formula Student world rankings — a position it has held since 2013, according to ETH Zurich.