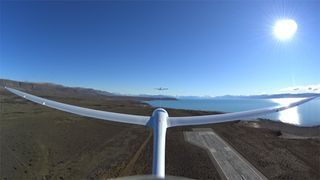 Researchers are currently conducting test flights in Argentina, and plan to ride the winds of Patagonia to reach record-breaking height.
(Image: © Perlan Project)

In a spot in South America known for its powerful winds, scientists and engineers are gearing up to attempt a record-breaking feat: to fly a human-carrying glider to the edge of space.

The expedition, known as Perlan Mission II, aims to take the glider up to an elevation of 90,000 feet (27,000 meters). The project is more than an attempt at aviation history; it's designed to study the layers of Earth's atmosphere. The researchers plan to fly the glider on a series of flights to measure electromagnetic fields, pressure, ozone and methane levels, and more.

To reach such great heights, the glider was built to take advantage of an atmospheric phenomenon called stratospheric mountain waves. [Earth from Above: 101 Stunning Images from Orbit]

"The strong winds will be perpendicular to the Andes, and as they come over the mountains, they cause a wave in the air that's invisible unless there are clouds present," Jim Payne, chief pilot for the Perlan Mission II project, told Avionics. "We fly in the area where the air is rising and propagates all the way up to 90,000 feet, although meteorologists say it may go up to 130,000 feet [40,000 m]."

Stratospheric mountain waves occur at peak strength in the Southern Hemisphere's winter months [summer in the Northern Hemisphere], so the Perlan Project team members recently traveled to Patagonia, in South America, where they will await ideal conditions for their first attempt at flying to the edge of space.

"Typically, the polar vortex, which causes the high-altitude wave, is best in August and September," Payne said. "So far, August has been disappointing; we haven't had the high-altitude winds. The one downside of this is that we're totally at the mercy of the weather."

If conditions are right and the flight is successful, Perlan would surpass the world altitude record for a fixed-wing aircraft. The current record of 85,068 feet (25,929 m) was set 50 years ago by the SR-71 Blackbird, a jet-powered spy plane, National Geographic reported. Unlike the Blackbird, the Perlan glider would achieve the feat without a drop of fuel.

Earlier this year, another aviation record was set without consuming any fuel. The Solar Impulse 2, a plane powered entirely by the sun, completed a journey around the world, becoming the first solar-powered aircraft to circumnavigate the globe without using any fuel.