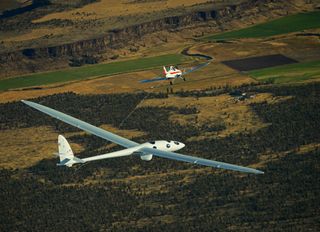 A photo of the Perlan 2 glider during its maiden flight.
(Image: © Airbus Group/Perlan Project)

Not many people can say they have traveled to the edge of space, but a team of scientists and engineers is daring to join those ranks.

The so-called Perlan Mission II aims to fly a manned glider 90,000 feet (27,400 meters) above the ground to unravel some of the mysteries locked up in the different layers of Earth's atmosphere.

Until recently, scientists thought that the planet's atmospheric layers (the troposphere, stratosphere, mesosphere, ionosphere and exosphere) remained static. But as scientists have learned more about the Earth's climate, it's becoming clear that these zones are dynamic. [Images: One-of-a-Kind Places on Earth]

The Perlan Mission researchers plan to measure the electromagnetic fields, wind speeds, temperatures, pressure, ozone levels and methane levels during a series of glider flights. The aircraft will be equipped with several instruments, including a small, lightweight lidar (short for light detection and ranging) laser sensor, to gather data alongside weather balloons.

"In addition to the main instrumentation, we are going to have four cubesats [at the back of the glider]," said Elizabeth Austin, the Perlan Project's head meteorologist and founder of WeatherExtreme, an international weather consulting firm.

Cubesats are miniature satellites used for space and scientific research. These devices typically weigh less than 3 lbs. (1.4 kilograms) each. The cubesat program for the Perlan Project is being run through NASA's CubeSat Launch Initiative, which encourages relatively small-scale investigations in areas of science exploration, technology or education.

The Perlan 2 glider is an engineless aircraft that can fly three times higher than commercial airliners, which typically cruise at altitudes between 30,000 and 40,000 feet (9,100 and 12,200 m). Researchers conducted a test flight of the Perlan 2 glider on Sept. 23, reaching an altitude of 5,000 feet (1,524 m). The flight was deemed a success, and the researchers did not encounter any unexpected problems, according to James Darcy, communications director for Airbus Group, a company that works in aeronautics, space and defense-related services and one of the Perlan Project's main sponsors.

But how is the Perlan 2 glider able to fly so high? The team designed the glider so that it can take advantage of an atmospheric phenomenon called stratospheric mountain waves.

These waves "start out as regular mountain waves, which we have all over the world," Austin told Live Science.

Mountain waves normally form when transition zones between cold and warm air masses move across mountain ranges and create high-altitude wind that moves up and down over mountaintops. Stratospheric mountain waves only form when the polar vortex — a large, low-pressure and cold air system — reaches peak strength in the winter months.

The strength of the polar vortex gives these winds a boost of energy that helps the mountain waves burst up through the tropopause, the layer of the atmosphere between the troposphere (where most weather occurs) and the stratosphere, and up into something called the polar night jet, which is the high-altitude version of the jet stream in which commercial airlines fly.

When the glider can access the polar night jet, it can break through the tropopause and reach an altitude of up to 130,000 feet (40,000 m) — the very edge of Earth's atmosphere.

The researchers will make their first attempt to get the Perlan 2 glider to these superhigh stratospheric mountain waves sometime between mid-June and mid-October 2016.

The Perlan Project, founded by research pilot Einar Enevoldson, is a volunteer-based operation to reach new heights in aeronautic research. Enevoldson was the first person to attempt to exploit the mountain wave phenomenon for high-altitude glider flights during Perlan Mission I, according to the Perlan Project website. Enevoldson teamed up with Austin in 1998 to expand their understanding of the stratospheric mountain wave phenomenon.

In 1999, record-breaking aviator Steve Fossett decided to back their research and began the journey that eventually led to the first glider's flight in 2006, which reached an altitude of 50,722 feet (more than 15,460 m).

The glider could have gone higher, but the pilots ran into a problem, Darcy said. "[The Perlan 1] was an unpressurized aircraft, so [the pilots] wore pressure suits, essentially space suits," he said. "The pressure suits inflated when they got to high altitudes." As a result, the aviators had to stop climbing once they passed 50,000 feet (15,000 m). But the idea to build a pressurized glider was born from these early efforts, Darcy said. Eventually, this resulted in the successful creation of a pressurized glider, the Perlan 2.