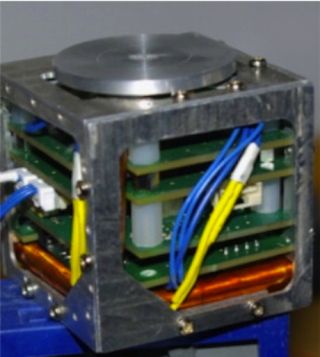 Seeking a low-cost way to launch their experiments into space, a team of scientists has designed a space-ready, 3-D printed CubeSat.

CubeSats are standardized, tiny satellites, often only 10 centimeters (3.9 inches) on each side and weighing less than 1.33 kilograms (just under 3 lbs). They are so small that they have room for only a few sensors, and burn up in the Earth's atmosphere after just a few months. Kits cost under $10,000, which is considered cheap for the space industry. But Jacopo Piattoni of the University of Bologna and his team aim to drive the satellites' price down even further, while making the devices easier to customize.

In 3D printing, a computer-directed nozzle "prints" a three-dimensional object in plastic. Often, engineers use this method to design a prototype for a product that will then be built out of metal or another, sturdier medium. But Piattoni’s team hopes their plastic CubeSat could survive launch and low-Earth orbit.

The CubeSat’s sensors and computer chips, of course, weren't printed in the lab, and the team had to add a small, metal heat sink to disperse the electronic components' heat. The method holds promise, though. When the researchers tested the chassis in near-space conditions, "it did really well," Piattoni said.

Piattoni chose ABS plastic, the same type of plastic used in Lego bricks, to construct his CubeSat because of that material's resilience to extreme temperatures, vibrations, radiation and more. A satellite will absorb a lot of solar radiation during its spaceflight, and its temperature will swing from -4 degrees F (-20 degrees C) to 176 degrees F (80 degrees C) each orbit. "It's not so easy for plastics in that environment," Piattoni said.

In fact, ABS plastic was famously indicted in a massive seat-belt buckle recall in the mid-90s because UV radiation weakened buckles made from the material. But such radiation, even at elevated levels, won't pose a problem for the CubeSat, due to its short lifetime.

With one successful satellite constructed, the team can now use the 3-D printer to crank out another copy each night. They can also test new designs or build support for other sensors or modules, just by clicking a few buttons on a computer.

The final product passed its tests with flying colors. Now, like most other CubeSats, it will hitch a ride into space as secondary cargo on a rocket already headed to its preferred orbit. Piattoni's team is working with QB50, which will put 50 CubeSats into orbit at once on a Russian Shtil-2.1 scheduled to launch in 2014.

The satellite was designed and tested by Piattoni and researchers in the University of Rome's Department of Astronautical, Electrical and Energy Engineering and the Department of Mechanical and Aerospace Engineering.