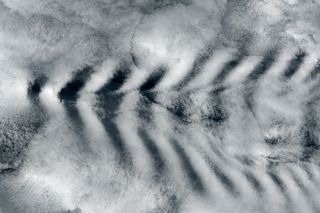 Tall peaks on a remote island in the southern Indian Ocean pierce through waves of fluid-looking clouds, creating a dramatic striped pattern in the sky.

Amsterdam Island lies in the Indian Ocean, about 2,000 miles (3,200 kilometers) away from the closest continent. Geologists estimate that the volcanic island formed about 300,000 years ago. The highest peak on the island reaches 2,844 feet (867 meters) above sea level, and that height was enough to interrupt some of the clouds passing over the island last month.

These kinds of clouds are called mountain-wave clouds, and they form when clouds pass over a raised landform. The tall peaks on Amsterdam Island disrupted the air that passed over it, pushing some of the air up into the atmosphere like wave crests. The rising air cooled, and eventually, clouds formed. The bottom of the waves remained too warm and too low in the atmosphere to form any clouds. The result was a ripplelike pattern that resembles ocean waves. Part of the island is visible below the clouds in the left corner of the image.

Wave clouds are usually stationary and hang over the land mass until another weather pattern or air mass breaks them up. These kinds of clouds can cause serious turbulence for aircraft. Since the clouds remain stationary, they have been well studied, and climatologists think observations of wave clouds could improve scientists' understanding of atmospheric conditions over open oceans and small islands.

Amsterdam Island lies in the southern Indian Ocean between Africa, Australia and Antarctica. The 21-square-mile (55 square km) island is home to a volcano that last erupted in 1792. The western side of the volcano collapsed and formed vertical cliffs that reach almost 2,300 feet (700 meters) high.