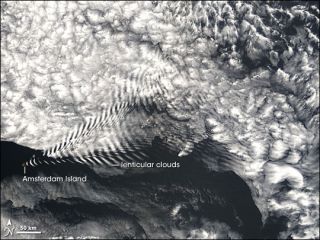 The tiny island makes a big waves in the clouds above.
(Image: © NASA.)

In mid-December 2005, the diminutive Amsterdam Island made waves—not in the Indian Ocean where it resides, but in the clouds overhead. Described casually as wave clouds, these features took on the shape of a giant ship before blending in with a larger cloud formation to the north and east.

The Moderate Resolution Imaging Spectroradiometer (MODIS) flying onboard the Terra satellite captured this image on December 19, 2005. The island itself is almost too small see in this image, but it serves as the starting point for the clouds that flow toward the northeast in a giant V shape. Amsterdam Island is a volcanic summit, the northernmost volcano on the Antarctic tectonic plate.

The volcano’s summit, poking above the ocean surface, conspired with atmospheric conditions to make these clouds. Pushed by wind, air ascended one side of this island then descended the other. As air rises, it cools and expands, and water vapor in the air condenses to form clouds. As air falls, the clouds evaporate. If the air is uniformly humid, it will likely form a uniform layer of clouds. If the air is dry, it may produce no clouds. But if the air contains alternating moist and dry layers, clouds form only in the moist layers of air. Known as lenticular clouds, they often look like flipped-over plates. Many of these clouds strung together form larger wave patterns like the one seen here.