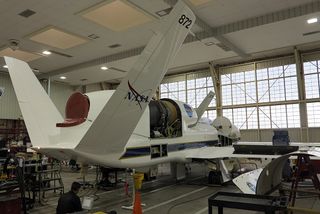 Water may play a critical role in controlling the ozone gas high up in Earth's atmosphere that can act as a greenhouse gas or protect living things on the surface below from the sun's harmful ultraviolet rays, depending on where in the atmosphere it is found.

To better understand how water vapor and ozone interact, NASA plans to send a remote-controlled plane laden with monitoring equipment into the stratosphere — the layer of the atmosphere where protective ozone is found — above the tropics.

The drone will crisscross the tropopause, the boundary between the troposphere (they layer of the atmosphere we breathe and where most weather occurs), and the stratosphere. The boundary is a fluid layer whose thickness can change and depends on the latitude it is located over but that is generally found some 8 to 11 miles (5 to 7 kilometers) above Earth's surface.

In the middle reaches of the troposphere, ozone is a greenhouse gas, trapping heat and contributing to smog. But high in the troposphere and the stratosphere, the familiar ozone layer protects the planet from harmful UV radiation.

When storms punch water vapor through the tropopause, into the stratosphere, scientists suspect chemical reactions between water and free radicals such as chlorine may zap and destroy the protective ozone. The NASA experiment will sample this layer near the equator off the coast of Central America where tall thunderstorms often occur.

The flights, which start this month, are the first of a multiyear campaign to study how changes in water vapor in the stratosphere can affect global climate. The Airborne Tropical Tropopause Experiment (ATTREX) relies on a Global Hawk drone, which can cruise for 30 hours from its home at Edwards Air Force Base in California. The aircraft are also used by the U.S. Air Force and Navy.

Predictions of stratospheric humidity changes are uncertain because of gaps in the understanding of the physical processes occurring in the tropical tropopause layer, NASA said in a statement.

"The ATTREX payload will provide unprecedented measurements of the tropical tropopause," Eric Jensen, ATTREX principal investigator, said in a statement. "This is our first opportunity to sample the tropopause region during winter in the Northern Hemisphere when it is coldest and extremely dry air enters the stratosphere."