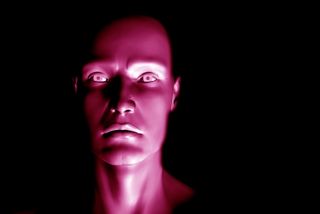 Could humans split into two species? Perhaps, if we engineer one or if a colony is isolated in outer space. Image
(Image: © stockxpert)

Editor's Note: This is the last in a 10-part LiveScience series on the origin, evolution and future of the human species and the mysteries that remain to be solved.

There are plenty of signs that humans are still evolving. However, whether humans develop along the lines portrayed by hackneyed science fiction is doubtful.

An old cliché has the highly evolved humans of the future sporting large heads to hold their advanced enlarged brains, "but that's nonsense, whole nonsense," said paleontologist Peter Ward at the University of Washington at Seattle, author of "Future Evolution."

"If you've ever gone through a childbirth or witnessed one," Ward says, "we're already anatomically right on the edge of how big our heads can go — our big brains have already caused extreme problems in childbirth, and if we had bigger and bigger brains, that'd cause more mothers to die in childbirth, so evolution would select against that."

Another idea, suggested by evolutionary theorist Oliver Curry of the London School of Economics, seems like a retread of ideas from science fiction writer H.G. Well's classic "The Time Machine," with the human species split in two over time — an underclass of dim-witted, short goblins, and a genetic upper class of tall, slim, healthy, attractive, intelligent and creative superhumans that eventually are spoiled by technology that will do everything for them, resembling domesticated animals.

"That's crap," Ward said. "Why would that happen? Are we like blind cavefish? After we get Google, do we get stupider? Intelligence is coded on too many genes to just lose a trait like intelligence. That's not going to happen."

As to whether humans will evolve to lose the arguably extraneous pinky for a cartoonish four-fingered hand, "that's crap," Ward said. "We've had five fingers for a long time. What aspect of natural selection would opt for four? Once a body plan seizes upon a number of digits, it doesn't change unless there's a damn good reason. It made sense for the horse to go down to a single hoof, but I can't think of why we would lose fingers."

Ward suggests that, if left untouched, humans might converge in appearance as populations mix. "I kind of view us all as eventually having chocolate-covered hair and medium stature, getting rid of all extremes," he speculated. "Of course, the big elephant in the room, the change from the past that you cannot ignore when talking about the future of human evolution, is genetic engineering."

Humanity now has an unparalleled means by which to direct our evolution — genetic engineering. By using viruses and other techniques, we can in theory modify our genomes, and over time, scientists may uncover genes underlying intelligence, health, athletic prowess, longevity and other desirable traits, engineering what might seem like superhuman progeny. Genetic engineering is how Ward speculated new species of humans might emerge.

"Let's say we create someone that can live 100 or 120 years," he said. "If you know you can live up to then, your whole pattern of investing could radically change. The amount of money that you could invest would go way, way, way up, and then economic incentives could drive selection away from mating with other creatures to seek out those similar to you."

Once populations are separated, given enough time and near-total lack of interbreeding, you would get divergence, he conjectured. Although short-lived humans could genetically engineer their own offspring for longevity, Ward suggested that interbreeding between populations would still remain low.

"I think taboos would arise which would prevent mating between populations — 'I don't want them anymore' or 'We want natural people,'" he said. "Of course this is all pure speculation, but this is the only way I can see new human species emerging — unless we get off the planet."

Another way new human species might occur is if we finally leave the cradle of our home world.

"If you want to make a new species, you have to really separate populations out," Ward said. "If we're all holed up on Earth, I don't see new species emerging, unless of course we engineer one. However, if we get some populations to split off by sending them off to space colonies, where they might evolve under different environments, it's possible."

The challenges entailed with leaving the solar system "could mean we might not ever colonize another star," Ward said. "But it could be that genetic engineering could make it possible."

"We might actually start selecting for the types of brain or nervous systems that allow one to go into hibernation," Ward said.

Our technology might readily spin us far past human shapes. Science fiction has long speculated as to whether or not we might one day be able to download our brains into computers or engineer bodies that can perform like spaceships.