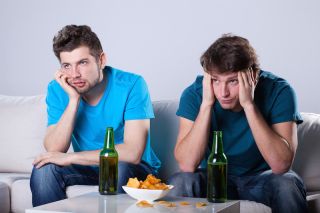 Other people's attitudes toward laziness and impatience can rub off on you, a new study from France reveals.

Researchers found that people not only pick up on other's attitudes toward three personality characteristics — laziness, impatience and prudence — but they may even start to imitate these behaviors, suggesting a strong social influence.

Prudence, impatience and laziness are personality traits that guide how people make decisions that involve taking a risk, delaying an action and making an effort, said Jean Daunizeau, a team leader of the motivation, brain and behavior group at the Brain and Spine Institute (ICM) in Paris. Daunizeau is the lead author of the new study, published today (March 30) in the journal PLOS Computational Biology. [7 Personality Traits You Should Change]

Prudence is a preference for avoiding risk, such as choosing a sure reward rather than a reward that may be greater but riskier to achieve, according to the study. Impatience is a preference for options that involve little delay and a strong desire for a payoff now rather than later. Lazy people are those who determine that the potential rewards are not worth the effort.

Typically, these three personality traits are thought of as "entrenched" traits, meaning  they are difficult to change, Daunizeau told Live Science.

The new study, however, suggests that this is not the case: People may unknowingly align their attitudes toward risk, delay or effort with the attitudes of others, Daunizeau said.

Next, the participants were asked to guess "someone else's" decisions on a similar task, and after making a selection, they were then told which choice this "other" participant had made, according to the study. But the "someone else" wasn't a real person — instead, it was a fake participant based on a computerized model developed by the researchers. This model predicted how people learn about, and learn from, other people's attitudes toward laziness, impatience and prudence.

During the final phase of the experiment, the participants repeated the first task, in which they were asked to make their own decisions.

The researchers found that after the participants observed the prudent, impatient or lazy attitudes of "others" on the task, their own choices about putting in effort, waiting during a delay or taking a risk drifted toward that of others. In other words, the participants started acting more like the computer-generated study participants.

Attitudes such as prudence, impatience and laziness are typically considered traits that are thought to be at least partly genetic, Daunizeau said. Moreover, researchers have thought that these three traits should be immune to environmental influences, such as social influence, at least in adulthood, he said.

One explanation might be that people imitate the behavior of others because of social norms, including the desire to feel as though they belong to a group, Daunizeau said. People imitate others so their behavior might conform to and resemble individuals in that group, he said.

A second explanation is that people may think others possess some form of private information about how to best behave in a social context, Daunizeau said. In this case, people imitate others because they have learned how to behave from others, he said.

The researchers are applying this work to learn whether the attitude alignment observed in this study may differ in people with neuropsychiatric disorders, such as autism spectrum disorder and schizophrenia.