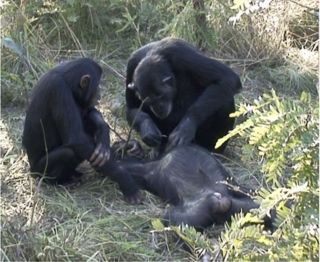 In a first, scientists have observed a chimpanzee cleaning the teeth of a dead companion.

This postmortem ritual, which was caught on video, hints that humans might not be the only animals to gently attend to their dead.

There was a bit of commotion when a 9-year-old chimpanzee, Thomas, died at the Chimfunshi Wildlife Orphanage Trust in Zambia a few years ago. After Thomas succumbed to a lung infection, the other chimpanzees gathered around his body. Most were easily lured away by caretakers holding food. Except for Noel. [8 Human-Like Behaviors of Primates]

This 33-year-old chimpanzee had adopted Thomas four years earlier after his mother died. She remained with Thomas' corpse, sitting by his head, as her adolescent daughter Nina watched on.

With the care of a mortician, Noel opened Thomas' mouth with her hands. She took a grass tool and poked it between his teeth, seeming to examine and even taste the debris she flossed out. [Watch Noel Clean Her Dead Son's Teeth (Video)]

Though death rituals vary across cultures, humans often treat corpses with care, whether that means embalming, mummification or a simple burial. Most other animals don't show much interest in dead members of their species.

However, scientists now have a growing body of evidence about some unusual animal kingdom mortuary practices. Crows seem to hold vigil over their dead. Elephants, dolphins and whales have been known to stick by their dead companions.

Chimpanzees, our closest living relatives, had also been seen engaging in some mourning behaviors in the past, like returning to,dragging and perhaps even trying to resuscitate corpses. But using tools to clean the dead is something new to science.

In the 1970s, researchers described live chimpanzees performing their own dental cleanings with tools (and even some tooth extractions). But this behavior had never been seen before as a response to death.

Scientists' observations of Noel and Thomas suggest the origins of humans' funerary rituals might extend deeper into our evolutionary past than scientists thought, according to the authors of the study, which was led by Edwin van Leeuwen, of the University of St. Andrews in the U.K., and published in the journal Scientific Reports on March 13.

"Chimpanzees may form long-lasting social bonds that continue to influence their behavior once the bonding partner has died," van Leeuwen and colleagues wrote. "Like humans, chimpanzees may not treat deceased conspecifics carelessly, but instead handle corpses in a socially meaningful way —i.e., as social beings instead of inanimate objects —especially when this group member is a close associate, as in the reported case."