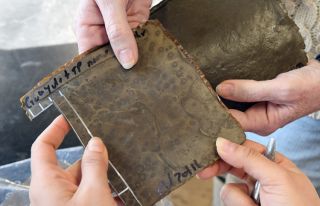 Tomato peels, eggshells and other food that gets discarded could be turned into sustainable rubber for use in tires, according to a new study.

Researchers found that the petroleum-based material used as filler for rubber tires could be made from food waste and other trash, offering a petroleum alternative in tire manufacturing. And beyond tires, the scientists think using food waste as a filler could expand the potential applications of rubber, they said.

About 30 percent of a tire is made up of carbon black, a petroleum-based filler usually obtained from overseas, according to the researchers. The material is becoming scarce as tire production continues to increase, and the researchers said there is no longer a surplus of carbon black filler. The scientists also noted that because carbon black is a petroleum product, the filler is not a sustainable option.

On the other hand, food waste like eggshells and tomato peels is plentiful. According to the U.S. Department of Agriculture (USDA), nearly 100 billion eggs are consumed by Americans each year. Half of those are used in commercial food factories, where the eggshells are taken to landfills by the ton, according to the researchers.

"We're not suggesting that we collect the eggshells from your breakfast," study lead researcher Katrina Cornish, a biomaterials researcher and professor at OSU, said in the statement. "We're going right to the biggest source."

The porous microstructures of eggshells offer a larger surface area to fuse with the rubber, offering more stability, according to the researchers. Tomato peels remain stable at high temperatures, giving the rubber tires a better performance, they added. Tomatoes are also the second-most popular vegetable in the U.S., with the USDA estimating that about 13 million tons of tomatoes are consumed each year. Meaning there are plenty of tomato peels, and eggshells, for the new technology

Cornish and her team obtained the eggshells and tomato peels from Ohio food producers, and are currently testing different combinations of the waste to create the most durable, flexible rubber. Their method of turning food waste into rubber filler is currently awaiting approval for a patent.