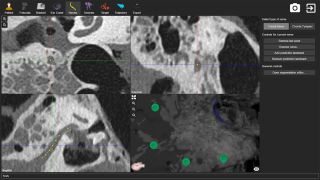 The surgical drilling robot assisted with an operation to implant a hearing device into a deaf woman's ear.
(Image: © Weber et al.)

For the first time, robots have successfully performed a tricky, delicate operation that helped implant a hearing device into a deaf woman's ear, according to a new study.

A 51-year-old woman who was completely deaf in both ears due to a rare autoimmune disease underwent an operation to receive a cochlear implant in her right ear to help her hear again, the researchers said.

"The patient is progressing well with speech and language training, and is expressing high satisfaction on the benefits of having a cochlear implant," said study lead author Stefan Weber, director of the ARTORG Center for Biomedical Engineering Research at the University of Bern in Switzerland. "Six months after the surgery, she is even able to partially communicate via telephone, which is a big step for her personal freedom." [The 6 Strangest Robots Ever Created]

Whereas a hearing aid amplifies sounds so damaged ears can detect them, a cochlear implant bypasses damaged portions of the ear to directly stimulate the auditory nerves responsible for hearing. As of December 2012, more than 324,000 cochlear-implant surgeries have been performed worldwide, according to the U.S. National Institute on Deafness and Other Communication Disorders.

"The auditory sensation is not comparable to normal hearing," Weber told Live Science. "However, after a certain amount of training, the brain is able to interpret the stimuli as speech and understand the sounds as language for communication."

The most delicate, trickiest part of implanting this hearing device involves placing the 0.01-inch-to-0.04-inch-wide (0.3 to 1 millimeter) electrode array in an opening that is typically 1.2 inches (30 mm) in diameter, according to the researchers. The slightest mistake can lead to irreparable damage, they said. As a result, about 30 to 55 percent of the 65,000 or so patients who receive cochlear implants each year worldwide continue to suffer significant hearing loss.

Now, Weber and his colleagues have developed what they say is the first robot-assisted cochlear implantation system to help overcome the challenges that human surgeons face when performing the procedure.

"When discussing much-needed surgical innovations for use in ear, nose and throat procedures, our surgeon colleagues would repeatedly mention that gaining access to the inner ear in a minimally invasive manner was a major hurdle that had not been resolved," Weber said. "This spurred us on to research and design a way to enable ear, nose and throat surgeons to perform keyhole surgery to access the inner ear."

According to the new study, most of the procedure is still completed manually by humans. However, the robot is responsible for one of the operation's riskiest steps: drilling a microscopic hole in the skull bone surrounding the ear without causing heat-related injury to nearby nerves. "The drill needs to pass between nerves at a distance of less than 1 millimeter," Weber said.

The researchers developed a robotic drill with the highest degree of accuracy reported yet for such a medical device, straying as little as about 0.015 inches (0.4 mm) in 99.7 percent of all drilling attempts, the scientists said. A camera also helped track the robot with 25-micron accuracy; in comparison, the average human hair is about 100 microns wide.

Moreover, the research team designed stainless-steel drill bits with grooves and cutting edges that are optimized for cutting into bone and transporting away bone chips, thus helping to minimize the amount of heat generated during drilling. A rim on the outside of the drill also reduces friction between the bit and the surrounding tissue while it rotates. During the procedure, there were several pauses during drilling to limit the accumulation of heat, and during each pause, bone chips were washed off the drill bits to keep them from adding to friction during drilling, the researchers said.

In addition, before surgery, the researchers used computed tomography (CT) scans of the patient's skull before, during and after the surgery to verify that the robot would steer clear of delicate areas. During surgery, the scientists also used electrodes attached to facial muscles to look for any damage to facial nerves.

"We are very excited about the results and that we were able to demonstrate such a complex technology in the operating room," Weber said. "It adds to the mounting evidence in many other areas that robots can potentially do things in surgery in a way a human surgeon would not be able to carry out without technology."

However, Weber cautioned that this new approach is only "the very first stage of changing how hearing surgery is done by ear, nose and throat surgeons. We think there is plenty of potential, but it will take lots more work before more hard-of-hearing people can have their hearing restored with new technology."

The scientists detailed their findings online today (March 15) in the journal Science Robotics.