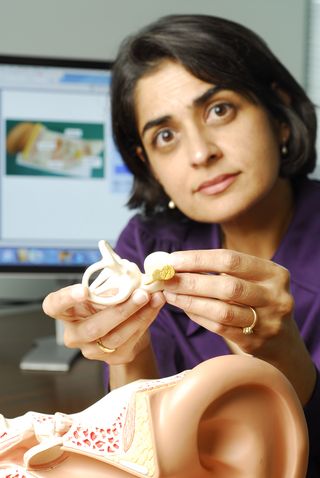 Pamela Bhatti, Ph.D., leads a team of scientists and engineers who are working on a new device that could dramatically improve sound resolution for deaf individuals who opt for cochlear implants. The researchers believe the new array could help users overcome the limitations in language perception that plague contemporary implants.
(Image: © Gary W. Meek, PhatPixel Media)

This 4-part series, published to coincide with Brain Awareness Week, highlights investments made by the Engineering Directorate of the National Science Foundation to develop cutting edge tools and technologies that will advance our understanding of the brain.

The cochlear implant is widely considered to be the most successful neural prosthetic on the market. The implant, which helps deaf individuals perceive sound, translates auditory information into electrical signals that go directly to the brain, bypassing cells that don't serve this function as they should because they are damaged.

According to the National Institute on Deafness and Other Communication Disorders, approximately 188,000 people worldwide have received cochlear implants since these devices were introduced in the early 1980s, including roughly 41,500 adults and 25,500 children in the United States.

Despite their prevalence, cochlear implants have a long way to go before their performance is comparable to that of the intact human ear. Led by Pamela Bhatti, Ph.D., a team of researchers at the Georgia Institute of Technology has developed a new type of interface between the device and the brain that could dramatically improve the sound quality of the next generation of implants.

A normal ear processes sound the way a Rube Goldberg machine flips a light switch — via a perfectly-timed chain reaction involving a number of pieces and parts. First, sound travels down the canal of the outer ear, striking the eardrum and causing it to vibrate. The vibration of the eardrum causes small bones in the middle ear to vibrate, which in turn, creates movement in the fluid of the inner ear, or cochlea. This causes movement in tiny structures called hair cells, which translate the movement into electrical signals that travel to the brain via the auditory nerve.

Dysfunctional hair cells are the most common culprit in a type of hearing loss called sensorineural deafness, named for the resulting breakdown in communication between the ear and the brain. Sometimes the hair cells don't function properly from birth, but severe trauma or a bad infection can cause irreparable damage to these delicate structures as well.

Traditional hearing aids, which work by amplifying sound, rely on the presence of some functioning hair cells. A cochlear implant, on the other hand, bypasses the hair cells completely. Rather than restoring function, it works by translating sound vibrations captured by a microphone outside the ear into electrical signals. These signals are transmitted to the brain by the auditory nerve, which interprets them as sound.

Cochlear implants are only recommended for individuals with severe to profound sensorineural hearing loss, meaning those who aren't able to hear sounds below 70 decibels. (Conversational speech typically occurs between 20 and 60 decibels.)

As an electrical engineer, Bhatti sees the current electrode configuration as a significant barrier to clear sound transmission in the current device.

"In an intact ear, the hair cells are plentiful, and are in close contact with the nerves that transmit sound information to the brain," says Bhatti. "The challenge with the implant is getting efficient coupling between the electrodes and the nerves."

Contemporary implants contain between 12 and 22 wire electrodes, each of which conveys a signal for a different pitch. The idea is the more electrodes, the clearer the message.

So why not add more wire electrodes to the current design and call it a day?

Much like house-hunting in New York City, the problem comes down to a serious lack of available real estate. At its widest, the cochlea is 2 millimeters in diameter, or about the thickness of a nickel. As it coils, it tapers down to a mere 200 micrometers, about the width of a human hair.

"While we'd like to be able to increase the number of electrodes, the space issue is a major challenge from an engineering perspective," says Bhatti.

With funding from the National Science Foundation, Bhatti and her team have developed a new, thin-film, electrode array that is up to three times more sensitive than traditional wire electrodes, without adding bulk.

Unlike wire electrodes, the new array is also flexible, meaning it can get closer to the inner wall of the cochlea. The researchers believe this will create better coupling between the array and the nervous system, leading to a crisper signal.

According to Bhatti, one of the biggest challenges is actually implanting the device into the spiral-shaped cochlea:

"We could have created the best array in the world, but it wouldn't have mattered if the surgeon couldn't get it in the right spot," says Bhatti.

To combat this problem, the team has invented an insertion device that protects the array and serves as a guide for surgeons to ensure proper placement.

Before it's approved for use in humans, it will need to undergo rigorous testing to ensure that it is both safe and effective; however, Bhatti is already thinking about what's next. She envisions that one day, the electrodes won't need to be attached to an array at all. Instead, they will be anchored directly to the cochlea with a biocompatible material that will allow them to more seamlessly integrate with the brain.

The most important thing, according to Bhatti, is not to lose sight of the big picture.

"We are always designing with the end-user in mind," says Bhatti. "The human component is the most important one to consider when we translate science into practice."

Editor's Note: The research depicted in this article has been supported by the National Science Foundation, the federal agency charged with funding basic research and education across all fields of science and engineering. Any opinions, findings, and conclusions or recommendations expressed in this material do not necessarily reflect the views of the National Science Foundation. See the Behind the Scenes Archive.