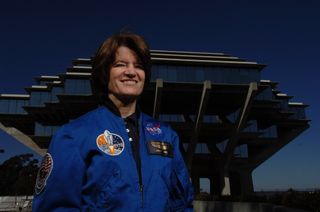 President Donald Trump signed into law two bills that aim to encourage women to pursue careers in science and technology.

The bills — "Inspiring the Next Space Pioneers, Innovators, Researchers and Explorers (INSPIRE) Women Act" and "Promoting Women in Entrepreneurship Act" — were both introduced by women in Congress.

The INSPIRE Women Act, introduced by Rep. Barbara Comstock, R-Va., authorizes the head of NASA, currently Acting Administrator Robert M. Lightfoot Jr., to support initiatives that will "encourage women and girls to study science, technology, engineering and mathematics and to pursue careers that will further advance America's space science and exploration efforts," according to a White House statement yesterday (Feb. 28). One such initiative, NASA Boys and NASA Girls, uses video chat programs to pair NASA mentors with young students across the country, according to the INSPIRE bill.

Next, the NASA chief will submit a plan to the appropriate House and Senate committees for achieving the bill's goals.

Similarly, the Promoting Women in Entrepreneurship Act, introduced by Rep. Elizabeth Esty, D-Conn., is meant to keep female scientists in sci-tech careers by authorizing the National Science Foundation to help women to spread their wings beyond a laboratory and into the commercial world with jobs in science, technology, engineering and mathematics (STEM).

"The bill encourages the National Science Foundation to tackle the problem that only 26 percent of women who attain degrees in STEM fields work in STEM jobs," according to the statement.

From sexist attitudes and family priorities to a lack of role models, reasons abound as to why girls don't enter STEM fields and why when they do many don't enter careers in those fields. Though progress has been made, research suggests women still fall short when it comes to sci-tech careers.

"Female scientists have made steady gains in recent decades but they face persistent career challenges," according to a Nature News article in 2013. "U.S. universities and colleges employ far more male scientists than female ones and men earn significantly more in science occupations."

Comstock applauded both bills, saying: "Our next generation of young women will now have greater opportunities to pursue careers in the STEM fields that are central to our 21st-century economy."