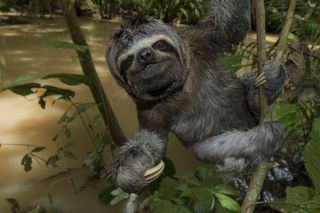 "Splash" the three-toed sloth hangs out near a tributary of the Napo river in Ecuador's Yasuní National Park during the VR shoot in Amazonia.
(Image: © Lucas Bustamante/Conservation International)

You can explore the Amazon rainforest's spectacular beauty and biodiversity right from the comfort of your home, thanks to a new 360-degree virtual-reality film from Conservation International.

The film, called "Under the Canopy," brings viewers into the depths of the Amazon, with the region's diverse environment on full display. But beyond the picturesque views, the film also shares a message with viewers: This incredible landscape is threatened and needs to be protected. The annual forest loss due to deforestation in the Amazonia region is more than 1.5 times the size of Yellowstone National Park, according to Conservation International, the nonprofit environmental organization that developed the virtual-reality experience.

The film begins at the top of a 200-foot-tall (60 meters) Ceiba tree. After descending to the rainforest floor, viewers set out on a journey with an indigenous guide named Kamanja Panashekung. Panashekung's family has lived in the region for generations, and he shows viewers how the rainforest supplies everything his people need to survive, according to Conservation International. [Beyond Gaming: 10 Other Fascinating Uses for Virtual-Reality Tech]

"Kamanja's community is one of over 350 indigenous communities throughout Amazonia that depend on the rainforest, as we all do, for the air we breathe and the water we drink," M. Sanjayan, Conservation International's executive vice president and senior scientist, said in a statement. "'Under the Canopy' gives those who may never visit the Amazon rainforest an opportunity … understand what is at risk. Sustaining the Amazon is not an option; it is a necessity."

However, the impact of deforestation is not limited to the 30 million people who call the Amazon home. Trees in the Amazon act as a carbon sink — absorbing and storing carbon dioxide, which helps lower greenhouse gas levels in the atmosphere.

The Amazon region also supports more flora and fauna species than any other environment, playing an important role in global biodiversity, scientists have said. Throughout the film, viewers will encounter tropical birds, butterflies, sloths and more.

Using either a virtual-reality headset for an immersive experience or watching the 360-degree video, viewers will see firsthand what the people, plants and animals of Amazonia experience. The film addresses how deforestation and climate change impact their ecosystem, said Chris Holtz, director of conservation and sustainable development at the MacArthur Foundation, which supported the production of the film.

"Intact forests play a unique role in mitigating climate change and regulating the functioning of the planet. Yet, many are at risk," Holtz said in the statement. "The virtual reality experience of 'Under the Canopy' allows anyone to immerse themselves in the rainforests of Amazonia and walk alongside members of an indigenous community in Suriname who conserve these forests as part of their traditional lands and, importantly, for the benefit of all humanity."